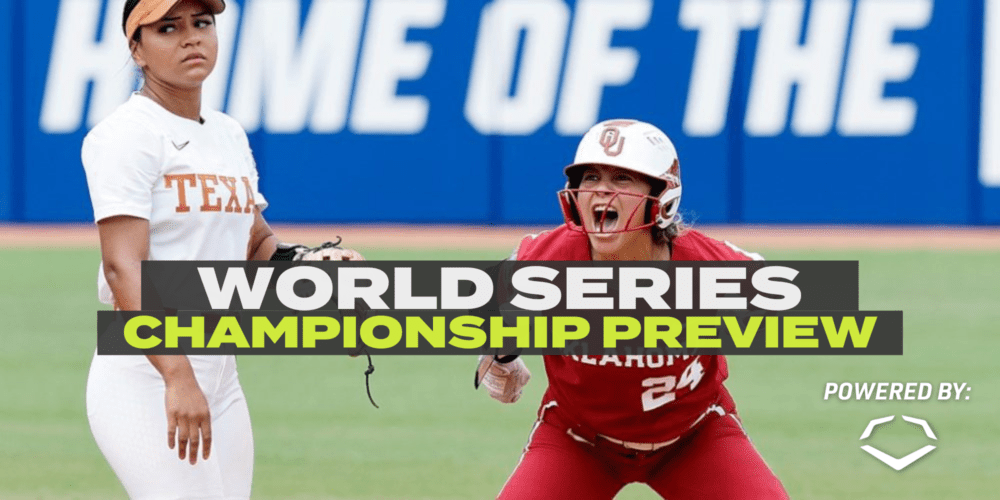 They’ve played for bragging rights, conference titles and personal pride, but Oklahoma and Texas have never played softball for stakes like what awaits in the Women’s College World Series championship round. It’s a best-of-three Red River showdown for the national title.

The favorite since the season’s first pitch, Oklahoma lived up to the billing by leading the nation in scoring, slugging and pitching. But if the sport arguably hasn’t seen anything like the assets the Sooners bring to bear, it also hasn’t seen a postseason run quite like Texas. The first unseeded finalist, Texas survived elimination games at Washington in a regional, at Arkansas in a super regional and Sunday and Monday in Oklahoma City.

The Longhorns turned the softball world on its ear with a 4-2 victory against Oklahoma on April 16 that snapped the longest winning streak to open a season in Division I history. Then again, that only came after the Sooners clinched the three-game series.

What will play out as they meet again inside Hall of Fame Stadium?

Why Texas could win: Because there has to be a first time. A first title for Texas after six trips to the World Series. A first title for an unseeded team since the current seeding structure took effect in 2005. And after Texas handed Oklahoma its first loss this season, a first time for a conference rival to beat the Sooners three times in a season since Missouri did so in 2011.

Granted, none of those are the most statistically or strategically persuasive arguments. But leaning into the “why not us” identity is undeniably essential to the Longhorns.

“We’ve been playing really free,” Longhorns coach Mike White said Tuesday. “And I think that’s the concept we’re playing with it is that we’re not supposed to be here. We play best when we’re relaxed and we’re carefree, and that’s what we’ve been doing.”

It might also be worth noting that all three Oklahoma losses this season came against teams it had previously faced (albeit with a sizable gap between games, in the case of UCLA).

Feeding off the energy

Inevitably, an us-against-the-world mentality to difficult to maintain for weeks at a time. It requires a lot of fuel and embracing the occasional straw man (straw burns well, after all). Fortunately for the Longhorns, and unlike just about any other opponent that could be cast in this role, playing the Sooners in Oklahoma City might be the best possible scenario.

The Longhorns already know what it feels like to have a crimson-and-cream crowd against them. They are familiar with Hall of Fame Stadium, from the World Series and the Big 12 tournament. The setting and the partisan crowd would be an obstacle for most teams. For Texas, it might be just what they want to keep fueling the fire that burned through Seattle and Fayetteville en route to Oklahoma City.

Still, games are about more than just emotions. In fact, after staving off elimination Sunday, White talked about pitcher Estelle Czech turning around a season spiraling out of her control by letting go of her emotions and focusing on the minute pitch-to-pitch fundamentals.

It’s a decent metaphor for the entire team’s postseason journey because the postseason run has very tangible and measurable roots.

One of the worst defensive teams in the Big 12 during the regular season, capable of seven-error nightmares like they suffered against UCF in February, Texas has committed all of five errors in 12 tournament games. That includes just two errors in Oklahoma City. With each team’s season on the line Monday night, Oklahoma State made the miscues. Texas turned the double plays.

“We’ve lost more games than other opponents have won against us, so to speak,” White said on the eve of the championship series. “We’ve shot ourselves in the foot a lot of times. We had multiple errors. Our team has played unbelievable defense in this postseason, and that’s what we go do. We’re doing ordinary very well.”

The defensive turnaround has fueled, and equally benefitted from, a pitching revival. Texas pitchers have just 52 strikeouts in 76 tournament innings (Oklahoma has 45 strikeouts in 53 tournament innings). But for a team that entered the World Series leaning on Hailey Dolcini for the second-highest postseason workload among participants, Czech’s success (as well as Sophia Simpson’s brilliant super regional finale) speak to a rotation brimming with confidence.

You aren’t going to get a lot of strikeouts agains the Sooners, even if you have strikeout pitchers. But as Dolcini demonstrated when she ended Oklahoma’s long winning streak in the regular season despite striking out just three batters in seven innings, you don’t need to if you can keep the ball in the park and trust your defense to make plays.

“The plan was to attack,” Dolcini said of that April encounter. “They’re a lineup, one through nine, of talented power hitters, and you can’t fear them, but you have to respect them. You have to trust that your stuff will beat their best swing.”

Why Oklahoma could win: Because they have to lose twice to not win. Along the way to the championship series, the Sooners lost three games this season. In the games immediately following those defeats, they outscored opponents 39-0 in three run-rule victories.

Time and again, from the back end of a doubleheader at Georgia a season ago to responding to World Series losses against James Madison and Florida State en route to the 2021 title, to the demolition job they pulled against UCLA in Monday’s winner-take-all semifinal finale, a team that loses with historic infrequency has proved remarkably resilient.

Somehow, this juggernaut even loses better than everyone else, as rarely as that’s tested. So, while Texas was the first to show Oklahoma isn’t invincible, no one has yet shown them to be vulnerable in a double-elimination setting.

“There’s no surprises here,” Oklahoma coach Patty Gasso said Tuesday. “It’s just understanding what we need to do offensively. I think our experience might help us some having been here last year at this point. I think both teams are working to kind of get on the board quickly, set the tone quickly, but I like the idea that we have this experience and we’ve been here and done that before.”

This doesn’t refer to Oklahoma’s penchant for run-rule victories – the run-rule isn’t in effect for games in the championship series (as the Sooners learned the hard way in the 2019 opener).

The teams will have to play all seven innings this week, but the Sooners will still to make sure the final six of them are a formality. And no teams does that better than Oklahoma.

It is incredibly difficult to get through Jayda Coleman, Jocelyn Alo, Tiare Jennings and Grace Lyons without effectively spotting the nation’s best team at least a one- or two-run lead.

Hope Trautwein is a championship-caliber ace

Gasso reiterated Tuesday that freshman Jordy Bahl is fully available for the championship series after making two appearances in the opening rounds of the World Series. Having the first-team All-American in any capacity removes one more potential vulnerability – there’s a much better chance of catching two pitchers having off days than three pitchers.

But just as it’s interesting to wonder how history would have unfolded if Trautwein picked Texas for her final season – a move White said Tuesday the Longhorns thought might happen when she entered the transfer portal – it’s equally interesting to ponder the narrative around the North Texas transfer if Bahl hadn’t emerged as college softball’s next big thing.

Take a look at how Trautwein’s line through the opening rounds of the World Series compares with the “aces” for the past four championship teams from Norman.

“This is the biggest stage that anyone will ever play on, so I really stuck to my process,” Trautwein said after her first start. “Deep breaths. Slowing my heart rate down. Really focus on the game. Lynnsie Elam had told me some advice before I came in. Look at the crowd once, and don’t look at them again. That’s what I did.”

The offense is still otherworldly

As good as Trautwein has been in an expanded role, Oklahoma’s pitching in the World Series has been on par with the best of the rest in the field, rather than lapping that field. The Sooners are pitching well enough to win a title, but not necessarily better than everyone else.

The hitting? That remains a different story. Sure, in a small sample size, a 15-0 victory against UCLA skews things a bit, but it’s also a 15-0 victory in the World Series.

And even without that rout, the Sooners would still have as many runs from their other three games as six teams in the World Series scored during their entire stays in Oklahoma City (and only two fewer than Texas in five games). And that lineup, with the guidance of hitting coach JT Gasso, has now had three looks at Dolcini this season and had its best results against her in the most recent of those meetings this past weekend.