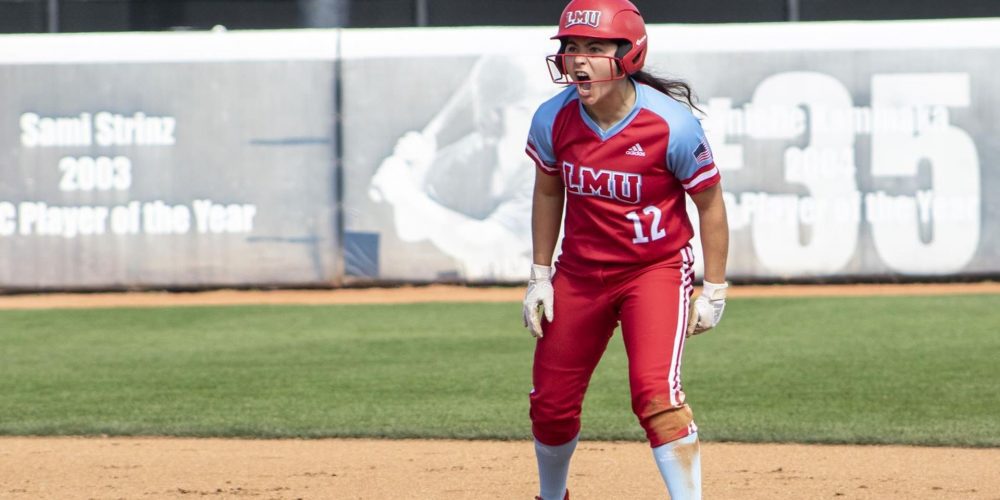 The tournament, which features 37 games over four days, started off with a bang on Thursday as LMU upset LSU 1-0. The Tigers rebounded for a 6-5 win over Texas Tech, which dropped both of its games on the opening day.

The host Titans beat Texas Tech and Cal on Thursday. CSUF entered the tournament with a win last weekend over ranked Arizona State and a tough Notre Dame team. No. 2 Washington is on a nine-game winning streak, after a 6-0 weekend at the Mary Nutter Collegiate Classic. Washington’s only loss was to Alabama back in Clearwater and the Huskies will surely be tested this weekend with games against LSU, Texas, Fresno State, Michigan and Cal State Fullerton. Freshman Kelley Lynch is coming off a stellar performance at the MNCC with two walk-off home runs and leads the team in home runs and is tied for second in RBI (16).

Texas travels to Fullerton after splitting with Louisiana Tuesday night and a big extra-inning win over No. 1 UCLA on Thursday evening in Los Angeles. The offensive juggernauts regained some of their firepower against the Bruins putting up 10 hits on UCLA ace, Megan Faraimo. Miranda Elish enters the weekend 8-2 with 1.15 ERA and 61 strikeouts.

This tournament is likely to be no different than the previous weeks with upsets, home runs, walk-offs and possibly a few pitching duels. Nobody is safe. (Tara Henry)

The field for one of the best-named tournaments (yes, there are 3 o’s in Wooo) includes 15 combined Women’s College World Series appearances – Florida State (10), Baylor (4) and Kent State (1). No. 8 Florida State and No. 24 Baylor meet twice while No. 23 Arkansas plays Baylor once and Florida State once.

Hosting its second straight tournament, Arkansas (12-3) is facing the first big tests of the season. The Razorbacks only played one Power Five program (Nebraska) through their first 14 games. It’s the first time they are hosting a ranked non-conference team since 2014, and the first time they are playing two ranked non-conference opponents at home in the same weekend in program history. Arkansas opened the tournament with a 3-2 loss to Baylor on Thursday. The Razorbacks have a .461 on-base percentage, and the pitching staff  has a 7.44 strikeout-to-walk ratio. Junior outfielder Hannah McEwen is batting .474 with five doubles, 8 RBIs and 19 runs scored. The staff is anchored by senior Autumn Storms (7-1, 1.06 ERA, 43 Ks, 1 walk in 39.2 IP) and junior Mary Haff (4-1, 1.30 ERA, 37 Ks and 7 walks in 32.1 IP)

Florida State endured an 12-day layoff before opening tournament play, the longest in the regular season for FSU since a 17-day break in 1999. The Seminoles had a much-anticipated midweek game against No. 25 UCF canceled on Wednesday, and hasn’t played since a 3-2 loss to No. 1 UCLA at the St. Pete Clearwater Elite Invitational on Feb. 16. Kiersten Landers is batting a team-leading .410 while Chloe Culp (12 RBI), Cassidy Davis (10) and Dani Morgan (10) have been the main run producers. Senior transfer Caylan Arnold is 2-1 with 1.48 ERA, 15 Ks and 4 walks in 28.1 innings. Kathryn Sandercock is 3-1 with a 4.00 ERA, 12 Ks and three walks in 21.0 innings.

Baylor is riding a 13-game winning streak, with the first of the 12 wins coming at home as the Bears won the Getterman Classic and Baylor Invitational in consecutive weekends. Back in the circle after missing last year with an injury, fifth-year senior Gia Rodoni is 7-1 with a 1.08 ERA, and threw a no-hitter against Tulsa last weekend. Freshman shortstop/pitcher Aliyah Pritchett has been a major addition at the plate, in the circle and on the field. Pritchett is 5-0 with a 2.33 ERA while batting .283 with three home runs.

Kent State redshirt sophomore Andrea Scali (3-3, 2.60 ERA) was named Mid-American Conference Pitcher of the Week last week after throwing a one-hit shutout against UT Arlington and recording 12 strikeouts in 4.2 scoreless innings against Texas Southern. Madi Huck is 3-0 with a 1.84 ERA in 19 IP. Brenna Brownfield is batting a team-leading .444 with three home runs and nine RBIs. Villanova possesses one of the best offenses in the Big East with 112 hits, 24 home runs and 72 runs scored through 15 games. Paige Rauch has a team-leading seven home runs. Eight players have hit at least one home run and seven have at least nine hits. (Rhiannon Potkey)

The top 10 teams meet in a three-game non-conference series Friday-Sunday. It’s the first regular season non-conference top 10 series at home since the Gators hosted Louisiana in 2016. The series is tied 5-5 and Florida owns a 3-0 advantage in Gainesville.

Florida is coming off an impressive showing at the Mary Nutter Collegiate Classic, with wins over Arizona, Arizona State, Northwestern and Nebraska. Florida’s only loss came in extra innings against No. 1 UCLA. Transfer Charla Echols has been a huge addition for the Gators. The sophomore is batting .463 with six home runs, four doubles and 22 RBI. Senior Kendyl Lindaman has a hit in 16 of Florida’s 18 games and currently leads the active NCAA Division I players in total RBI (198). In the circle, Natalie Lugo is 6-1 with a 1.40 ERA, 64 strikeouts and 16 walks and freshman Rylee Trlicek is 7-1 with a 1.58 ERA, 19 strikeouts and six walks.

Louisiana’s trip to Florida punctuates a challenging non-conference stretch for the Ragin’ Cajuns as they try to beef up their RPI. Louisiana split a midweek doubleheader with No. 3 Texas in Austin, with both games decided by a single run. All-American pitchers Summer Ellyson (7-1, 1.33 ERA) and Megan Kleist (5-3, 1.54) have combined for 102.2 IP and 116 strikeouts versus 20 walks. Junior Bailey Curry hit two home runs against Texas, including a mammoth game-winner in Game 1. Louisiana’s current 11-day road trip has entailed 1,449 miles traveled by bus and 1,124 miles by airplane. (Rhiannon Potkey)

No. 5 Arizona vs. No. 10 Alabama
Where: Rhoads Stadium (Tuscaloosa, Ala.)
Broadcast: SEC Network+

The marquee showdown at the Easton Crimson Classic this weekend is between these powerhouse programs. They meet twice – on Friday at 7 p.m. ET and on Saturday at 5 p.m. ET. Arizona holds a 12-6 advantage in the series, but Alabama has won the last four games and holds a 2-1 edge in Tuscaloosa.

Alabama is in the midst of a 19-game homestand. The Tide won all five games at last weekend’s Easton Bama Bash, outscoring opponents 51-8 with four run-rule victories and three shutouts. Sophomore Skylar Wallace had 12 RBIs and nine runs scored while junior KB Sides was 6 for 9 with eight RBIs. Sophomore pitcher Montana Fouts got a little of her mojo back in the circle, posting a pair of complete-game shutouts with 18 strikeouts.

Arizona went 3-2 at the Mary Nutter Collegiate Classic last weekend, dropping a pair of one-run games against Texas A&M and Florida and posting shutouts against Missouri, San Diego State and Auburn. Alyssa Denham (5-1, 2.27 ERA) enters the weekend leading the nation in shutouts (4). Mariah Lopez is 7-2 with a 1.07 ERA, 60 strikeouts and 17 walks in 46 IP. Senior Jessie Harper became the 28th player in NCAA history with 70 career home runs when she hit two two last weekend to push her total to 71. Alyssa Palomino-Cardoza has a team-leading 20 RBIs with five home runs and four doubles. Sophomore Marissa Schuld leads the Wildcats with a .429 average. (Rhiannon Potkey)

The tournament honors the life of former Mississippi State player Alex Wilcox, who died in 2018 at age 18 while receiving treatment for ovarian cancer after her freshman season with the Bulldogs. “I think we want to make sure we do a good job of continuing to remember in Alex’s honor but also celebrate her life and everything she stood for,” MSU head coach Samantha Ricketts said.

This year’s tournament has some unique connections that make it special. Wilcox was from the Birmingham, Alabama area, and UAB’s Jenna Olszewski, Macey Petrey and head coach Jimmy Kolaitis are all connected to Wilcox. Olszewski threw out the first pitch at last year’s UAB teal game against MSU, which raises awareness for ovarian cancer, and Petrey played with Wilcox at MSU. Kolaitis recruited Wilcox while he was coaching at South Alabama and Oregon. Wilcox’s final at-bat on April 18, 2018 came against Alcorn State. “Putting softball aside, the most significant thing that happened to us tonight was we were on the same field as Alex Wilcox. That’s the opportunity we are proud of,” Alcorn head coach Josef Rankin said at the time. (Rhiannon Potkey)