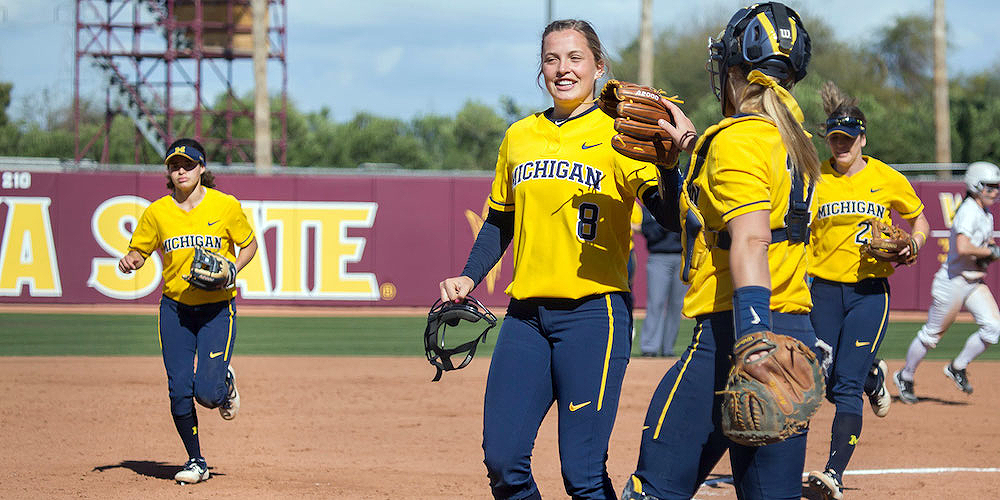 This is also the third time in the tournament’s history that Team USA has used this weekend as part of its Olympic preparation. Team USA was part of the very first Mary Nutter Collegiate Classic (then called the Palm Springs Classic, later named the Cathedral City Classic) back in 2004, and attended again in 2008. This year is the first time since 2008 that softball has been part of the Olympic Games, so Team USA is back at the Mary Nutter.

Top-ranked UCLA made a big statement at the St. Pete-Clearwater Elite last weekend, and will play four collegiate opponents this weekend: Texas A&M, Wisconsin, No. 14 Florida, and Auburn, as well as a Sunday contest against Team USA.

On Friday, No. 4 Arizona plays No. 14 Florida at 12:30 p.m. on Wrigley, and Sunday will feature UCLA playing a doubleheader against first Auburn and then Team USA.

With 30 collegiate teams, 70 collegiate games plus four featuring Team USA, Cathedral City, Calif., is the place to be for college softball this weekend. (Amy Symons Hughes)

Baylor (8-2) is riding high after an undefeated weekend at the Getterman’s Classic with a championship game win over Prairie A&M. The Bears look to build on their six-game winning streak on the arm of Gia Rodoni (4-1).

Illinois dropped three games last weekend in the Big Ten/ACC Challenge, falling twice to Notre Dame and once to NC State. However, freshman Delaney Rummell led the Illini on both sides of the ball receiving Co-Freshman of the Week honors in the Big Ten after posting a .400 batting average with four hits, four RBI and three home runs. Sydney Sickle recorded 13 strikeouts against NC State, tying the program record set by Amanda Fortune back in 2001.

Tulsa (8-1) is off to its second-best start in program history going 7-0 before losing to Tennessee State at the Bulldog Classic last weekend. The Hurricanes will face their biggest test Friday morning against No.16 Minnesota. The two teams with square off twice with a second matchup at 9:00 a.m. on Sunday morning. Keep an eye on Junior Samantha Pochop, who started the season with 0.52 ERA in 5 appearances and 17.1 innings.

Minnesota (5-4) went 2-2 last weekend at the St. Pete Clearwater Elite Invitational with wins against ranked Florida State and a hot Mizzou team in six innings. The Gophers walked-off FSU on a single by freshman Sydney Strelow and run-ruled the Tigers. The pitching staff has a 3.27 ERA giving up 32 runs on the season. Amber Fiser (3-4) is getting acclimated to another new catcher this season but remains the current NCAA strikeout leader (71) in nine appearances.

Texas State (7-2) lost its two games to ranked teams at the NFCA Classic to begin the season and is now on a five-game winning streak. The Bobcats have a trio of arms in the circle posting a 1.18 ERA as a staff. Tori McCann, Dalilah Barrera, and Meagan King all have complete game wins for Texas State. (Tara Henry)

Because of weather-related travel issues, the tournament schedule had to be altered before the first pitch was thrown. South Carolina’s Friday game against Iowa State has been moved to Saturday at 8 p.m. ET.

No. 11 Michigan’s 9-0 start is the program’s best since 2011. Junior left-hander Meghan Beaubien and sophomore right-hander Alex Storako have combined to go 9-0 with two saves and a 1.72 ERA. Storako ranks third in the nation in strikeouts per seven innings (13.2) and fourth in total strikeouts (62). Senior Haley Hoogenraad leads Michigan with a .458 average and five doubles. The Wolverines are 4-0 in one-run games.

Liberty’s record is a bit deceiving considering the quality of competition the youth-laden Flames have played. Liberty (1-9) will be facing its seventh straight Top 25 opponent on Friday when it meets Michigan. The last time the teams played was in 2007, when then-No. 6 Michigan became the highest-ranked opponent Liberty has ever beaten. Through 10 games this season, Liberty has already faced more Top 25 teams (eight) than the Flames did in all of 2019 (seven). Kara Canetto leads Liberty with a .345 average. Karlie Keeney is 1-2 with a staff-leading 3.90 ERA.

Iowa State senior Sami Williams is on the cusp of history. The California native is just two home runs away from breaking the program’s all-time career mark of 42. Williams is batting .324 with four home runs, three doubles and 15 RBIs for the Cyclones (5-5). She is the active leader in career doubles with 62, which is a Big 12 Conference record. The Iowa State pitching staff is the youngest in the nation, and the freshman trio of Karlie Charles, Janessa Jasso and Ellie Spelhaug have a combined ERA of 3.09.

Boston College’s pitching staff has been a major bright spot under new head coach Amy Kvilhaug, a Hall of Fame pitcher at Providence. The Eagles have allowed only 13 total earned runs and an ACC-low 39 hits. They are the only team in the ACC to not allow a home run yet this season. Susannah Anderson is 3-3 with a 1.16 ERA, 39 strikeouts and nine walks in 36.1 innings. The sophomore right-hander is coming off a complete-game two-hit shutout against Nebraska last weekend. BC’s offense has produced only 13 total runs with a collective average of .167. Ellie Mataya (.370) is the only BC player batting more than .180.

Elon (7-2) went 4-0 last weekend at its second home tournament of the season, beating Radford, Siena and Morgan State twice. The Phoenix dropped a midweek game at N.C. State, giving up four home runs in a 12-4 loss. Megan White, the 2019 CAA Co-Rookie of the Year, has continued to produce offensively. The sophomore is batting .478 with four home runs, two doubles and 12 RBIs. In the circle, senior Kenna Quinn is 4-0 with a miniscule 0.27 ERA in 26.0 innings. (Rhiannon Potkey)


Outside of the Palm Springs area, Birmingham is the place to be this weekend for a lot of softball action. Along with the Blazer Classic, Samford is hosting a tournament that includes Kentucky, Georgia Tech and DePaul.

No. 8 Oklahoma State vs. No. 10 Louisiana will meet twice at the Blazer Classic on Friday afternoon and Saturday morning. Oklahoma State is off to a 6-3 start against a strong schedule and an exhibition against Team USA. As expected, senior transfer Carrie Eberle has paid immediate dividends. The 2019 ACC Pitcher of the Year is 3-1 with a 0.75 ERA and 24 strikeouts in 28 innings.

Louisiana counters with All-Americans Summer Ellyson and Megan Kleist, who have combined to limit opponents to eight earned runs in 54.2 innings. The Ragin’ Cajuns will be playing outside the state of Louisiana for the first time. Kendall Talley provided a spark in her debut at the top of the lineup last week. The redshirt sophomore was 8 for 14 with a double, triple and five RBIs. Alissa Dalton has been a defensive stalwart at short, making only one error in her last 78 chances.

UAB (8-3) has matched its best start in program history through 11 games. Junior Amy Woodham was named Conference USA Co-Pitcher of the Week for her performance at the Scrap Yard College Softball Classic. Woodham was 2-0 with two shutout performances. The Alabama native lowered her ERA to 0.70. The Blazers hve six players batting over .300, led by senior Dylinn Stancil (.514). Sierra Frazier is batting .457 with three home runs, six doubles and 13 RBIs.

It’s been tough sledding early for Ole Miss (2-8) in the wake of a late offseason coaching change. The Rebels don’t have any players batting over .300. Molly Jacobsen leads the pitching staff with a 3.51 ERA in 33.1 innings. Ole Miss hopes to have gained some positive momentum with a five-inning 11-0 home-opening win over Mississippi Valley State on Wednesday. Amanda Roth drove in four runs in the victory.

Ole Miss advanced to the NCAA Super Regionals last season by knocking out Louisiana. The teams will meet again on Saturday afternoon, and the Ragin’ Cajuns will be the heavy favorites to exact a little revenge. (Rhiannon Potkey)