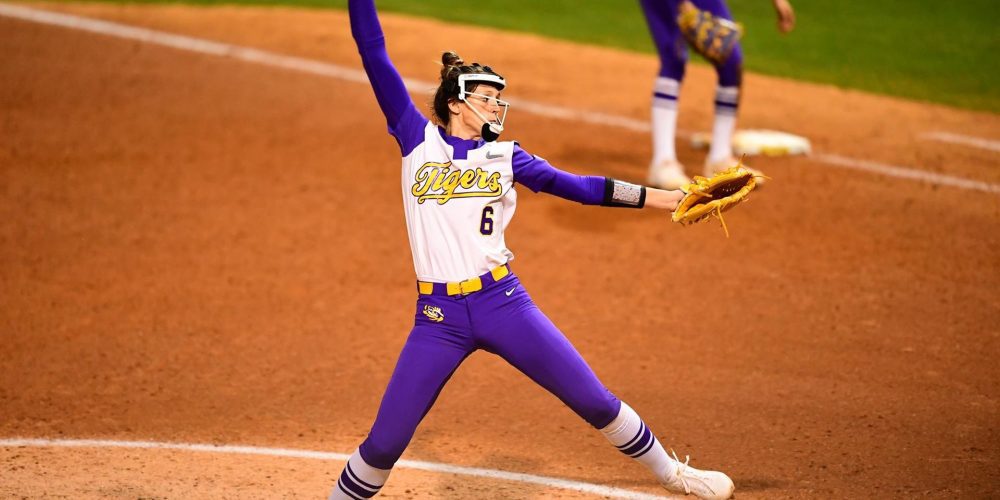 A perfect game, long balls, coaching milestones and historical wins: Rhiannon Potkey and Tara Henry bring you the 12 things that stood out on Saturday, Feb. 22nd.

2. No. 5 Washington (13-1) used the long ball to turn the much-anticipated showdown against No. 2 Oklahoma into a one-sided affair quickly. The Huskies hit three home runs in the first two innings, including two from sophomore transfer Baylee Klingler, to beat the Sooners 12-2 in front of a standing-room only crowd at the Mary Nutter Collegiate Classic. Klingler entered the game with just one home run this season, but doubled her total in just two at-bats. The Sooners (11-2) cycled through three pitchers before the second inning ended. Oklahoma All-American Giselle “G” Juarez lasted only 1.0 inning, giving up two earned runs and walking two as she continues to recover from a biceps injury. Klingler hit a two-run home run in the first and a two-run home run in the second. Ari Quinones and Jadelyn Allchin hit their first career home runs for the Huskies. UW is playing without All-American shortstop Sis Bates (concussion protocol) for the second straight weekend.

3. No. 1 UCLA (14-0) needed back-to-back extra-inning wins at Mary Nutter to remain undefeated. Jenavee Peres hit another #MomBomb, but she did it in walk-off fashion this time. The UCLA graduate senior belted a two-run home run in the 8th inning to lead the Bruins to a 3-1 win over Wisconsin. Peres has returned to softball this season for the first time since getting pregnant with her son in 2017. UCLA sophomore pitcher Megan Faraimo had a career-high 16 strikeouts with no walks in seven innings to hold Wisconsin’s offense in check. In the nightcap, the Bruins scored on a wild pitch in the bottom of the eighth to secure a 5-4 victory over No. 14 Florida. In the top of the 8th, Kelli Godin made a catch in left-field for the second out and threw out the runner heading home from third to complete the double play for the Bruins. Faraimo (9-0) had 10 strikeouts in 6.2 innings of relief.

Peres to left-center, her fourth of the season.

4. Down goes Michigan. The No. 11 Wolverines entered the day undefeated. Michigan (10-2) ended the day with two losses after falling to Iowa State 5-1 and South Carolina 3-0 at the Gamecock Invitational. South Carolina’s Karsen Ochs limited the Wolverines to just two hits.

5. Down goes Texas. Duke (12-1) defeated a ranked opponent for the first time in program history by handing Texas its first loss of the season 1-0. The Blue Devils collected just three hits in seven innings against Texas ace Miranda Elish, scoring a single run in the fourth to beat the Longhorns. Peyton St. George hurled a complete-game shutout against an explosive Texas offense. In an earlier game, Texas barely defeated Lipscomb 12-11 on a walk-off RBI fielder’s choice by Lauren Burke in the bottom of the seventh inning.

The throwdown to second seals the biggest win in Duke program history as the Blue Devils hand No. 4 Texas a 1-0 loss – its first of the season! #NCAASoftball | 🎥 @DukeSOFTBALL pic.twitter.com/HmXudCSwZG

6. Montana beat the first ranked team in program history by taking down No. 24 Arkansas 5-0 at the Razorback Invitational. The Grizzlies scored five runs on five hits in the top of the first and made it stand thanks to a complete-game three-hitter by Michaela Hood.

7. Oklahoma State senior Carrie Eberle threw her first career no-hitter to lead the Cowgirls to a 3-0 victory over host UAB at the Blazer Classic. The right-hander had five strikeouts and one walk to extend her streak without giving up an earned run to 33 straight innings. The 2019 ACC Pitcher of the Year while at Virginia Tech, Eberle is coming off her first Big 12 Pitcher of the Week honor.

8. College of Charleston head coach Linda Kalafatis joined an exclusive club by earning her 1,000 career win when the Cougars beat Appalachian State 1-0 at the Charleston Invitational. Kalafatis is one of 15 active Division I coaches with 1,000 career wins. She improved to 1,000-630-2 in 31 seasons, including 192-155 in seven years at Charleston. “When I got into coaching I never thought I’d have a shot at this milestone. I took it game-by-game and year-by-year,” Kalafatis said. “It’s nice to look back on the great teams I’ve been a part of and the players who I’ve been able to coach.”

9. Maryland freshman Courtney Wyche recorded a career-high 15 strikeouts in a 1-0 win over Evansville at the Eagle Round Robin. Wyche finished with a one-hitter, and notched her final strikeout on a full count with two outs in the seventh inning.

10. Fairfield had to wait much longer than most teams to play its season opener. But the Stags sure started with a bang by beating No. 22 North Carolina 11-2 at the UNC-Greensboro Invitational on Saturday. Farfield’s games on Friday against Purdue and UNC Greensboro were postponed because of weather, prolonging the wait to finally open 2020. In the win over UNC, Amanda Ulzheimer was 3 for 4 with three runs scored and Kaitlin Hoffman drove in three runs.

11. Stony Brook’s Jourdin Hering hit for the cycle in a 9-2 win over Providence. Hering singled in the first, tripled in the second, hit a solo home run in the fourth and completed the cycle with a double in the sixth. The senior outfielder finished 4 for 5 with 4 runs scored and two RBIs from the leadoff spot.

12. USF junior Kyndall Williams picked a good time to hit her first career home run. Williams belted a walk-off two-run shot in the bottom of the seventh to lead the Bulls to a 2-1 victory over No. 18 Tennessee at the USF Invitational. The loss was Tennessee’s third straight, including being run-ruled in back-to-back games against UCF.

Bonus: Minnesota’s MaKenna Partain is the kind of middle infielder you want on your team.