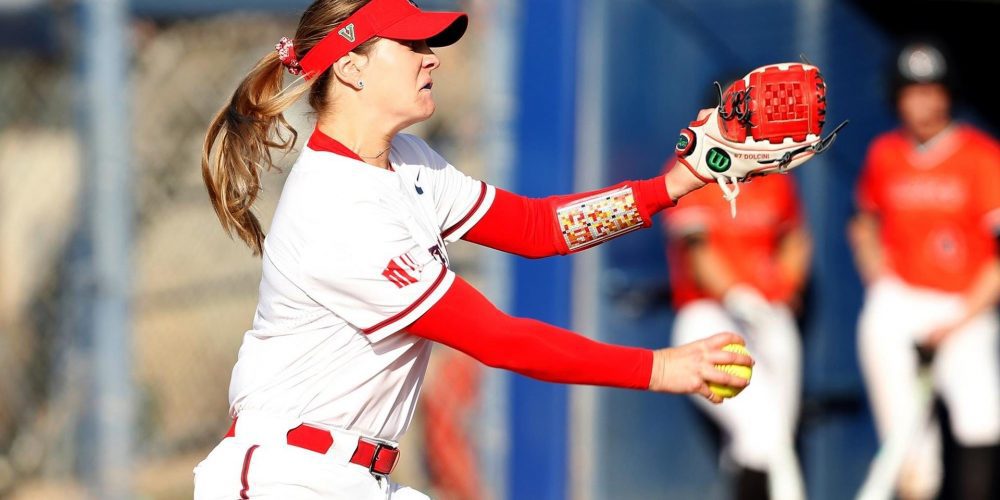 Fresno State junior Hailey Dolcini led the Bulldogs to an upset of No. 3 Texas. (Kiel Maddox)

Everyone has a loss and everyone has a chance. That much is clear as Rhiannon Potkey and Tara Henry get you caught up on what happened Saturday in the Daily Dozen:

1. Nobody is safe in this wild season. If the first three weeks have taught us anything, it’s clearly that. The term “upset” should be used judiciously. Among the results on Saturday that elicited some big-eye emojis:

2. Down to its final out, No. 5 Arizona rallied to beat No. 10 Alabama 6-5 on a three-run home run by Malia Martinez at the Easton Crimson Classic in Tuscaloosa. Alabama had scored three runs with two outs in the sixth inning before the Wildcats mounted their own two-out rally to beat the Tide for the second straight night. Sharlize Palacios and Marissa Schuld hit singles to set the stage for Martinez’s big bomb off Alabama freshman Lexi Kilfoyl. The environment at Rhoads Stadium was electric and dripping with NCAA-like intensity.

3. There are ZERO undefeated teams remaining after Oregon (16-2) and Stony Brook (7-1) both lost on Saturday. The Ducks lost twice, falling to No. 11 Oklahoma State 5-4 in nine innings in the nightcap in Stillwater. It took a perfect game from University of North Florida pitcher Morgan Clausen to take down Stony Brook 1-0 in nine innings. Clausen struck out nine batters, and UNF scored the game-winning run on a walk-off squeeze bunt with the international tiebreak rule in place.

4. No. 7 Louisiana roared back from a four-run deficit to beat No. 9 Florida 7-5 at Katie Seashole Pressly Stadium in Gainesville and even the three-game non-conference series. Louisiana trailed 4-0 entering the second inning, but a two-run triple from Carrie Boswell tied the score and Kaitlyn Alderink hit the go-ahead RBI single. Summer Ellyson limited Florida to two base runners from the second through the sixth innings and Megan Kleist secured Louisiana’s first win in Gainesville by retiring the final three batters. The rubber match of the series is slated for Sunday at noon ET.

5. No. 8 Florida State beat two ranked teams at the Wooo Pig Classic. The Noles beat No. 24 Baylor 5-3 one day after losing to the Bears 2-1 and took down No. 23 Arkansas 2-1. Against the host Razorbacks, Caylan Arnold allowed one unearned run on four hits with just one walk in 5.0 innings while Josie Muffley and Elizabeth Mason drove in the runs.

6. Oklahoma was able to exact quick revenge on North Texas, beating the Mean Green 15-8 in a rematch slugfest. Freshman Kinzie Hansen hit two home runs, including a grand slam. Jocelyn Alo and Hansen went back-to-back in the third inning before Hansen cleared the bases in the fifth.

Full highlights from a ｃｒａｚｙ game ✌️ in Norman.

7. Kentucky’s offense is putting up historic numbers this weekend. The No. 14 Wildcats have outscored the competition 62-3 in four games at the Spring Games. On Saturday, Kentucky beat Western Michigan 13-0 before setting a new school record with 22 runs in a game in a 22-0 victory over Detroit. Mallory Peyton has driven in 13 runs. She hit two home runs in the same inning on Friday in a 17-1 win over FIU. Alex Martens, who moved into second place all-time at Kentucky for RBIs on Friday, added five more RBIs on Saturday. Kayla Kowalik had three triples Saturday to increase her total to seven this season, which ties Tiffany Kruse for most triples in a single season in program history.

8. Jolie Fish hit a grand slam as Wisconsin beat No. 17 Arizona State 10-1 at the Sun Devil Classic in Tempe. Fish’s bases-clearing blast capped a five-run fourth inning that gave the Badgers a 10-0 lead over the host school one night after suffering a 3-1 loss to ASU.

10. Willa Ferrer picked a great time to hit her first career home run. The freshman belted a walk-off shot to lead Yale to a 7-6 win over Hofstra at the Liberty Classic. Ferrer finished 4 for 4.

Thrilling victory to close out Day 2 of the Liberty Classic

🥎 Willa Ferrer 4-for-4, including the game-winning home run.
🥎 Annie Tarte 2-for-3 with two runs scored
🥎 Miranda Papes earns her fourth win in the circle.#ThisIsYale pic.twitter.com/Cq3GC3Pmd9

11. Upset alert a Bruin. SDSU faced No. 1 UCLA in a late night matchup at the San Diego State Classic. The Aztecs and Bruins entered the top of the seventh inning scoreless. Maggie Balint (former Oregon Duck) threw an impressive 4.1 innings in relief striking out 6. UCLA scored 5 runs in the seventh allowing Megan Faraimo to pick up her 11th win of the season.

12. Eastern Kentucky (16-2) stretched its win streak to 12 games with victories over Southern Miss and Alabama State. EKU scored an unearned run in the bottom of the seventh to beat Southern Miss 1-0