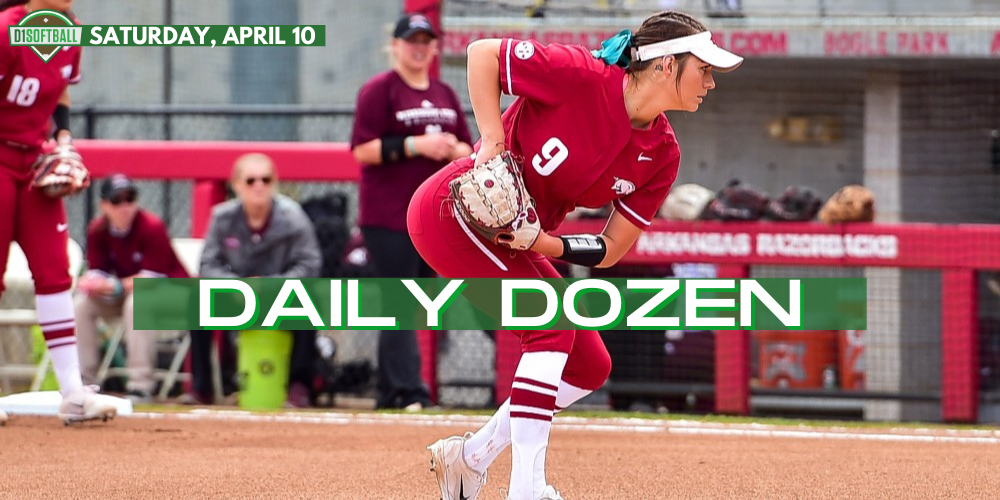 1. UCLA didn’t wait very long to get revenge on Oregon for shutting out the Bruins in the series opener on Friday. UCLA’s Aaliyah Jordan led off Saturday’s doubleheader with a home run against Brooke Yanez, who held the Bruins scoreless a day earlier, to launch UCLA’s sweep of the Ducks in Eugene. After Briana Perez was hit by a pitch, Rachel Garcia belted a two-run home run to give the Bruins all the runs they would need in the 3-0 win. Garcia (5-0) pitched a complete-game shutout, allowing eight hits and two walks while striking out seven. In the second game, which doesn’t count in the Pac-12 standings, UCLA beat the Ducks 9-2 behind a complete-game effort from Holly Azevedo and a three-run home run by Delanie Wisz.

2. On a cold and wet day when her name felt entirely appropriate, Autumn Storms pulled off one of the most difficult feats in college softball. She upstaged a Braxton  Burnside home run. Oh, and she also shut out Alabama in a 4-0 win that evened the series that is a battle for first place in the SEC. That’s also sort of a big deal. In becoming the second pitcher this year to blank the Tide, Storms allowed just two hits while striking out 10. She also allowed just one runner to reach base with two outs, never giving Alabama room to build a rally after Burnside staked her to a lead with her 21st home run this season. Catcher Kayla Green gave her pitcher some more cushion by hitting two home runs in a game for the second time this week.

3. When it comes to Minnesota pitching, you question Piper Ritter at your own risk. Minnesota’s coach had her own Autumn force of nature going strong Saturday. Autumn Pease allowed just two runs in six innings against Northwestern, the Big Ten’s best offense. That after Pease closed out Friday’s series opener with a save. But Ritter went to the bullpen to begin the bottom of the seventh — and not to Amber Fiser. She turned to Ava Dueck, who had thrown just seven innings all season. The result? Ritter knows her pitchers and Minnesota won 6-2.

4. A program breaking its single-season home run record is commendable, but unless it’s Arizona or Oklahoma, it usually isn’t a stop-the-presses occurrence. But it also doesn’t usually happen in just the 31st game of the season. Wichita State hit six home runs while sweeping two games against Houston on Saturday, including a walk-off blast in an 11-2 run-rule win to finish the day. The Shockers have hit 64 home runs this season. Leadoff hitter Sydney McKinney hit two Saturday, part of a 7-for-8 day at the plate.

5. It took Mike White less than three seasons to reach 100 wins at Texas. The Longhorns delivered White his milestone win by beating Iowa State 11-5 with junior Janae Jefferson belting two home runs to double her career total in just one game. White improved to 100-23 (.813) at Texas. The Longhorns broke the game open by scoring five runs in the third inning. Texas has scored at least three runs in an inning 47 times already in the 2021 season. Jefferson belted her first home run of the game to lead off the first inning and capped the win by homering in the seventh inning. The All-American has all four of her career home runs this season. The two against Iowa State were her first two against a Power 5 program.

6. There have been a lot of great pitchers at Washington over the years. Gabbie Plain now stands above them all in one category. The senior improved to 19-0 with a win over Oregon State, becoming the first UW pitcher to begin a season with 19 straight wins. Plain didn’t allow a hit until the seventh inning of the 4-2 victory while striking out 12. In the second game of the doubleheader, Oregon State once again waited until the seventh inning to get a hit. But this time the strategy paid off for the Beavers as junior Morgan Allen hit a walk-off home run for a 3-1 win.

7. Speaking of Pac-12 walk-off home runs, Jazmine Hill hit the first pitch she saw in the seventh inning over the left field wall to deliver Arizona State a 5-2 walk-off win over Stanford. The Sun Devils swept the doubleheader, with Alynah Torres breaking open game one with a grand slam in the sixth inning for a 10-6 victory.

8. Troy and Louisiana open a three-game series Sunday with 10- and 14-game winning streaks, respectively, and first place in the Sun Belt on the line. The battle for third place is also pretty entertaining. A day after ending Texas State’s 18-game winning streak, South Alabama turned it into a losing streak by beating the Bobcats 1-0. Held in reserve Friday, South Alabama’s Olivia Lackie threw a two-hit shutout and waited for a bases-loaded walk in the seventh to give her the run she needed.

9. Mississippi State pitchers played two games Saturday — one of them against record-chasing juggernaut and top-ranked Oklahoma — and allowed just eight hits. Granted, that is the most silvery of linings on a very strange day. The high for the Bulldogs came early, with Annie Willis throwing a no-hitter in a 2-0 win against Louisiana Tech. It’s the 23rd no-hitter in program history, the last two supplied by the senior who transferred from Troy prior to the 2020 season. The next game didn’t go as well, with Oklahoma earning a 9-0 run-rule win against alumna Samantha Ricketts. The Sooners scored eight of those runs on just four hits in the third inning.

10. Rivals Michigan and Ohio State split their doubleheader on Saturday in Columbus, with Michigan beating the Buckeyes 3-1 in the opener and Ohio State emerging with a 3-2 win in the second game to hand Meghan Beaubien only her second loss of the season. Payton Buresch outdueled Beaubien while relying on her defense, giving up seven hits while striking out just one batter with one walk. Michigan’s Hannah Carson had the only extra-base hit in the game. Alex Storako limited Ohio State to just two hits in the opener, striking out 11 Buckeyes to improve to 9-2. Lou Allan ad Julia Jimenez had home runs. Having won Friday’s series-opener, Michigan goes for the series win on Sunday while Ohio State battles for the split.

11. Florida was scheduled to play two games on Saturday, but rain shortened the plans. Maybe Mother Nature just likes the score 5-2. The Gators beat Western Kentucky 5-2 in the opener before their exhibition game against Canada Softball was called after four innings because of inclement weather approaching with Canada leading 5-2. Charla Echols remained hot at the plate for Florida with her fifth home run in five games in the win over Western Kentucky and an RBI double against Canada.

12. Drexel pulled off maximum drama in sweeping a doubleheader against traditional CAA power Hofstra. Holly Bridgman clinched the sweep with an extra-inning walk-off hit in the nightcap, but that arguably wasn’t even the headline. That came when Brooklyn Daly threw a no-hitter in the opener. It’s the third no-hitter of the senior’s career, a total that includes one perfect game. She was aided Saturday by a two-run home run from, you guessed it, Bridgman.

Bonus: What do Alabama head coach Patrick Murphy, Nebraska head coach Rhonda Revelle and Angels manager Joe Maddon have in common? Other than being longtime respected skippers, they all got ejected from games Saturday. Murphy was kicked out for arguing ball and strikes after voicing displeasure earlier in the game about a call at Arkansas, which serenaded Murphy with an instrumental version of “My Heart Will Go On” by Celine Dion as he left the field with his backpack. Revelle was ejected along with pitcher Olivia Ferrell after Ferrell unintentionally hit an Illinois batter after the two clubs had been warned earlier. It was Revelle’s first ejection since 1995. Maddon was ejected for arguing a call in the Angels’ 15-1 loss to the Blue Jays. Revelle’s club was the only one that still won the game.