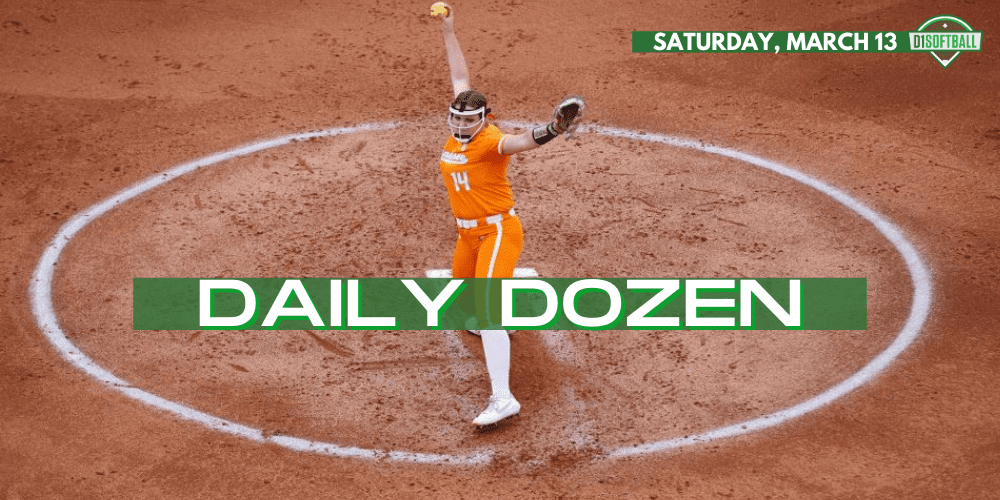 1. Two intense extra-inning games that featured game-winning home runs. Nothing symbolized SEC opening weekend more than the doubleheader between No. 23 Tennessee and No. 10 LSU. The teams split the two games in Knoxville, with both going eight innings. Taylor Pleasants hit the game-deciding home run in the top of the eighth of Game 1 as LSU won 2-1. Ivy Davis answered in the nightcap with a walk-off home run in the bottom of the eighth for the Lady Vols in the 4-3 win. Tennessee tied Game 2 in the bottom of the 7th when LSU catcher Cait Calland couldn’t handle the throw home while trying to make the tag. The Lady Vols escaped a jam in the 8th when pitcher Ashley Rogers entered the game and her infield turned a double play with a runner on base. Game 1 was a pitching duel between Rogers and LSU’s Shelbi Sunseri and Ali Kilponen. Rogers went the distance with 11 strikeouts and four hits allowed in the loss while Kilponen picked up the win with three scoreless innings of relief.

2. It was highly-anticipated, and the series between No. 15 Florida State and No. 3 Arizona delivered with throwback vibes. Good pitching, solid defense and small ball. FSU clinched the series with a 2-0 victory over Wildcats in the rubber match at JoAnn Graf Field. The Seminoles scored their first run on a squeeze bunt by Josie Muffley to score Sydney Sherrill. Kathryn Sandercock kept Arizona off the board for 3.1 innings and Caylan Arnold was stellar in relief once again. Arnold allowed no hits and struck out 8 in 3.2 IP. The teams combined for nine runs in the three games. FSU’s infield performed at an elite level on defense. The Wildcats return to Arizona having gone 4-3 against USF, UCF, Florida A&M and FSU.

3. Can Houston get to the World Series? That’s getting several miles ahead of the story for a team first trying to get to a winning record. But Houston’s Sarah Queen had her Oklahoma City moment Saturday, and it came against the kind of opponent that populates the city in May. Queen’s four RBIs matched the redshirt senior’s career high and propelled the Cougars to a 4-2 win against No. 5 Oklahoma State in the Hall of Fame Classic in Oklahoma City. It was just the second loss this season for the Cowgirls and the first against an unranked team. Queen did her damage with a three-run home run in the third inning that erased a two-run deficit and an RBI single in the fifth inning that padded the lead. Originally a doubleheader, Saturday’s action was changed to a single game due to weather.

4. There aren’t many tougher ways to get indoctrinated into the SEC than facing Alabama. Auburn freshmen pitchers Shelby Lowe and Maddie Penta dove right into the deep end against the rival Crimson Tide. Alabama clinched the series with a 4-1 win. Lowe got the start and held the Tide in check through five innings. The lefty gave up four hits and two earned runs in 5.1 IP. Despite both pitchers suffering losses, they showed the future is bright in the circle for Auburn. The more experience they get against SEC lineups, the more improvements they can make.

5. A 17-0 start would have been amazing. A 16-1 record somehow feel just as impressive to when it took a no-hitter to stop you. Southern Illinois finally lost a game this season, falling 2-0 against Samford in the first of two games in Birmingham, Ala. Samford’s Taylor DeCelles and Emily Barnett combined to deny the Salukis any hits, DeCelles working five innings for the win and Barnett recording the save with two innings in relief. Southern Illinois had extended its program-record winning streak to 25 games (dating back to last season) with wins Friday against UAB and Ball State. The newfound hard luck continued in a 1-0 loss to UAB in the second game of the day, the Salukis stranding 10 runners in a game that went nine innings.

6. Braxton Burnside had two home runs on the season after Arkansas finished the first game of a doubleheader against North Dakota State on Feb. 25. She woke up Sunday with 14 home runs. How much did you accomplish in the past 17 days? Burnside added the two more home runs to her ongoing binge in a 7-5 win against South Carolina on Saturday. Included was the two-run home run in the top of the 10th that clinched the game and the series for the Razorbacks. It’s remarkable that Oklahoma’s Jocelyn Alo has homered in 16 of 20 games this season — it’s incredible that she isn’t running away with the home run race because Burnside won’t let her.

7. No. 8 Florida took advantage of errors to score all of its runs in the second inning and wiggled out of a late jam to clinch the series over No. 13 Kentucky with a 3-1 win in Game 2. All three Florida run were unearned runs. They went ahead for good when Cheyenne Lindsey’s infield hit went through the legs of Lauren Johnson at second base and plated two runs in the second. Kentucky loaded the bases with two outs in the sixth, but Elizabeth Hightower entered the game in relief and induced a flyout. Natalie Lugo, Katie Chronister and Hightower held Kentucky, which entered the series averaging 10 runs and 11.2 hits per game, to just three hits for the second time.

8. With a name like hers, it only makes sense that Ohio State’s Sam Hackenbracht makes her swings count. Northwestern paid the price Saturday. Hackenbracht’s two-run home run was the big blow in Ohio State’s 4-2 in the first game of a doubleheader, ending Northwestern’s nine-game winning streak to open the season. A second-year player, Hackenbracht is just getting started. So she finished Saturday with 10 career hits. Seven of those 10 hits went for extra bases, including three home runs. That’s getting your money’s worth. Northwestern righted its ship in the second game, winning 9-0 to remain atop the Big Ten standings.

9A. Georgia’s Lacey Fincher hit an opposite field walk-off grand slam that sneaked over the right field wall to help the Dawgs beat East Carolina 6-2 in nine innings.

9B. Duke’s Caroline Jacbosen also hit a ninth-inning walk-off home run as the Blue Devils rallied form a six-run deficit to beat Virginia 10-9 and extend their winning streak to 12 straight games. Kristina Foreman sent the game into extras with a home run in the bottom of the seventh. She nearly hit for the cycle, with a double, triple and home run (rare because the single is usually the easiest part).

10. Do you think Alex Storako was a bit ticked off about being part of Michigan’s loss against Nebraska on Friday? The Michigan sophomore threw a two-hit shutout in her team’s 8-0 run-rule win against Wisconsin on Saturday. Then she turned around and pitched four innings in relief in a 3-0 win to sweep the doubleheader against the Badgers. Her line in that game? She faced 13 batters and struck out 12 of them. Her total line for the day: 9 IP, 2 H, 0 ER, 20 K.

11. Notre Dame registered an impressive sweep of North Carolina. The Irish beat the Tar Heels 13-0 and 4-0. They tallied 28 hits, including six home runs, while allowing just six total hits to UNC. Senior Abby Sweet was 7 for 8, including 5 for 5 with two home runs, two doubles, four RBIs and a stolen bases in Game 1 to extend her on-base streak to 31 straight games dating back to last season.

12. Villanova head coach Bridget Orchard registered career win No. 800 in the Wildcats’ 6-0 victory over Hofstra. Orchard spent 21 years at Fordham before being hired at Villanova in 2019. She was was 624-378-1 (.623) at Fordham, and previously won 129 games in four seasons at nearby Cabrini in her first head coaching stint.

BONUS: Take a moment to admire the athleticism and glove work of Oregon’s Alyssa Brito.