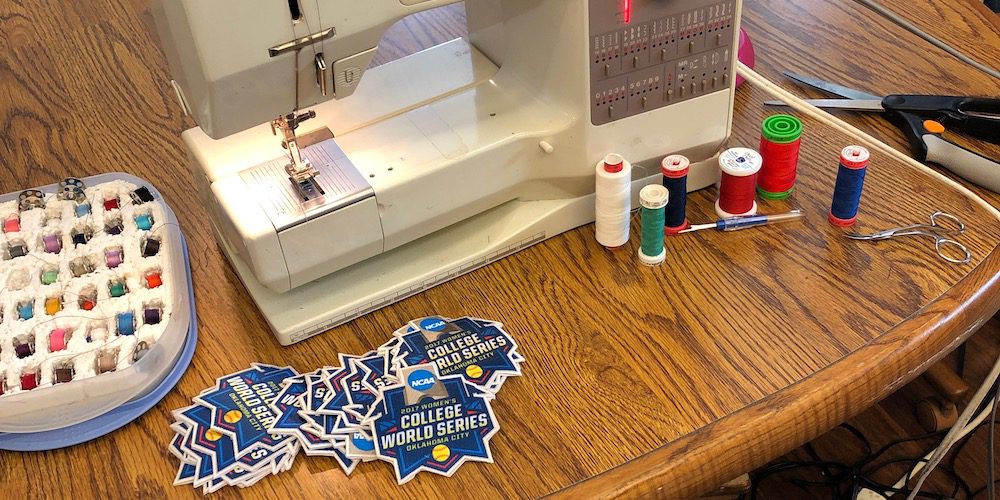 Carolan Bledsoe would normally be packing her Bernina 1230 sewing machine into her car this morning and driving to the Sheraton Hotel in downtown Oklahoma City.

Bledsoe would check into a reserved room, place her machine on a table and begin sewing for 24 straight hours without sleep.

For the last 23 years, the routine has brought Bledsoe great joy as a volunteer for the Women’s College World Series.

Nicknamed the Patch Lady of the WCWS, Bledsoe’s handiwork is seen all over ESPN once the games begin. Bledsoe, 75, is responsible for sewing the official NCAA WCWS patches on the uniforms of players participating in the sport’s biggest event. 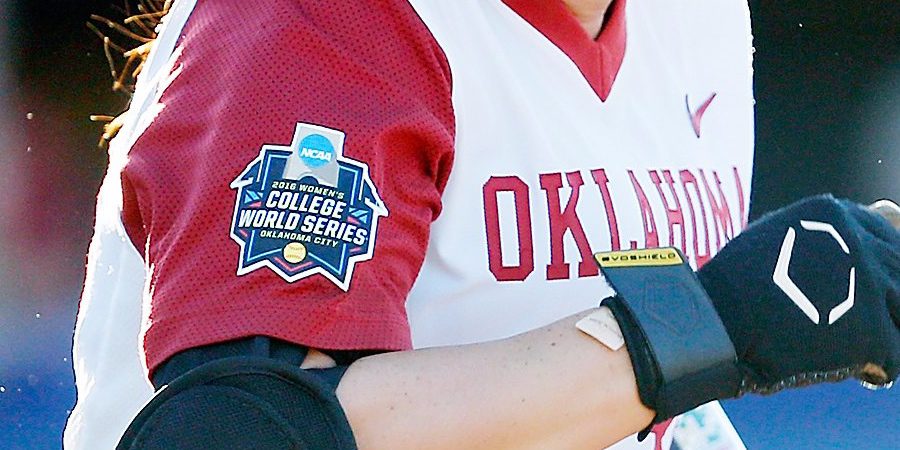 But Bledsoe’s sewing machine will be much quieter this year with the WCWS having been canceled because of the coronavirus pandemic.

“It’s a huge void. It really is,” Bledsoe said. “I have met such wonderful people from all around the country. Everyone has become like family because we see each other every year at the Women’s College World Series.”

Bledsoe never imagined her sewing skills would become a longstanding tradition at the WCWS.

The Oklahoma native was selling tickets at the convention center in 1997 when she received a frantic call from someone at the Oklahoma City All-Sports Association. The woman who usually sewed the patches had moved away and a new seamstress was needed.

Already a big fan of the sport, Bledsoe was happy to offer her services.

“I really had no idea what I was getting into at the time,” Bledsoe said. “But it’s been such a pleasure to contribute to this experience for the players and the teams. They all work so hard to get here and they deserve to have it be memorable.”

Bledsoe is meticulous about her work.

She sews 320 patches each year at the WCWS, with every team delivering two uniforms for each player to her hotel room. The uniforms are sorted by left-handed batters and right-handed batters so the patch is on the shoulder facing the ESPN cameras in centerfield. The patches for pitchers are sewn on the opposite shoulder of the arm they use to pitch for comfort. 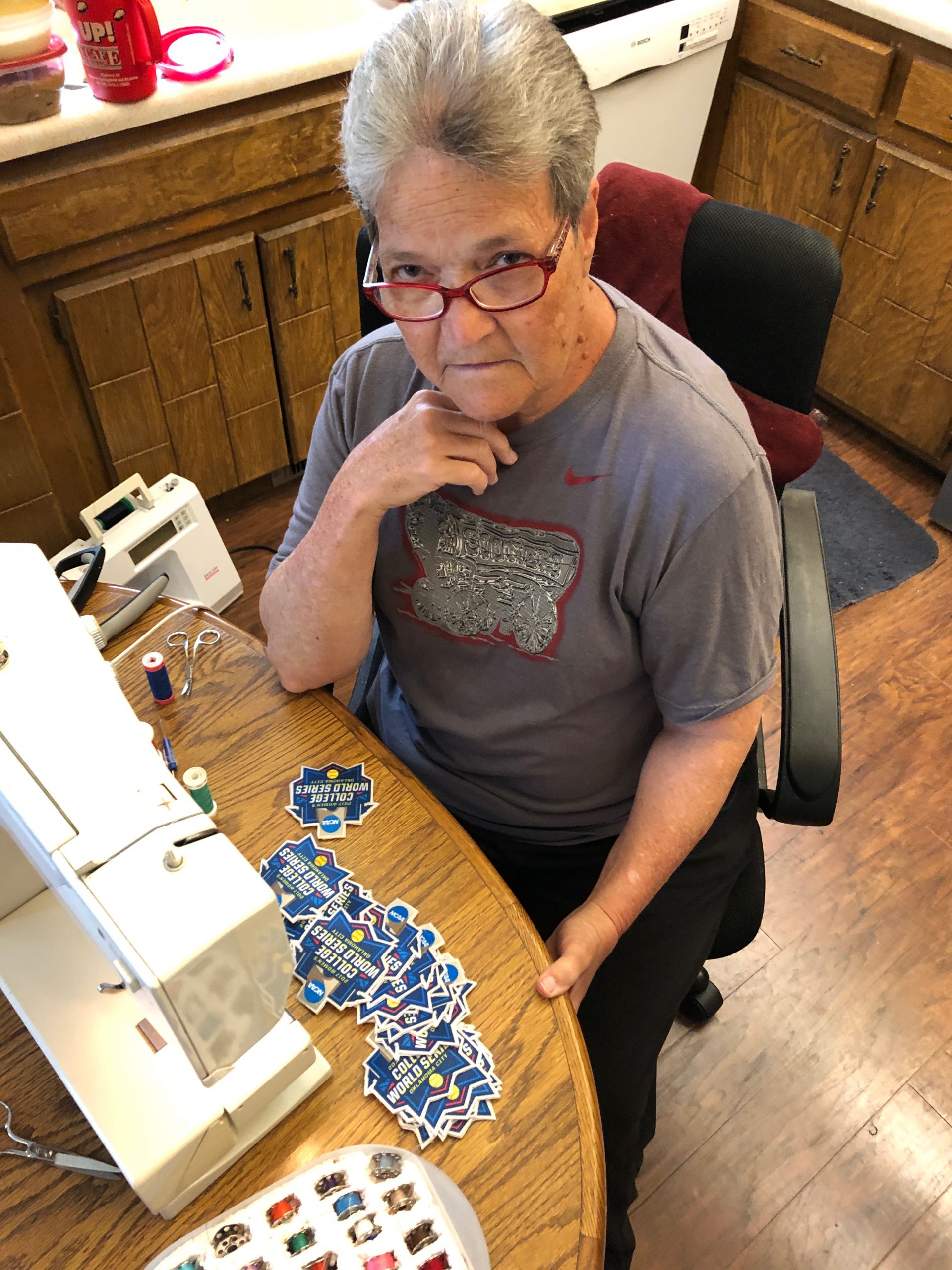 As the patches have grown over the years and included more detail, the time Bledsoe needs to sew each patch has increased.

Bledsoe has only 24 hours to complete her work so players can be available for ESPN interviews on Wednesday wearing their uniforms with the patches showing.

“It is not the first time I’ve stayed up that long straight for sewing,” Bledsoe said. “I think the longest I have ever gone was 36 straight hours of sewing constantly when I was making bridesmaid dresses.”

Bledsoe watches the Super Regional games to make sure she has the ideal thread colors to blend with the uniforms before the teams arrive in OKC. “I am really picky about that,” she said. “It has to all match.”

Although most deliveries to her hotel room go off without a hitch, a few have been more memorable. One team didn’t wash their uniforms before handing them over.

“The smell from opening that duffel bag full of dirty uniforms was unreal,” Bledsoe said. “Thank goodness most of them are delivered to me clean, folded up and ready to go.” 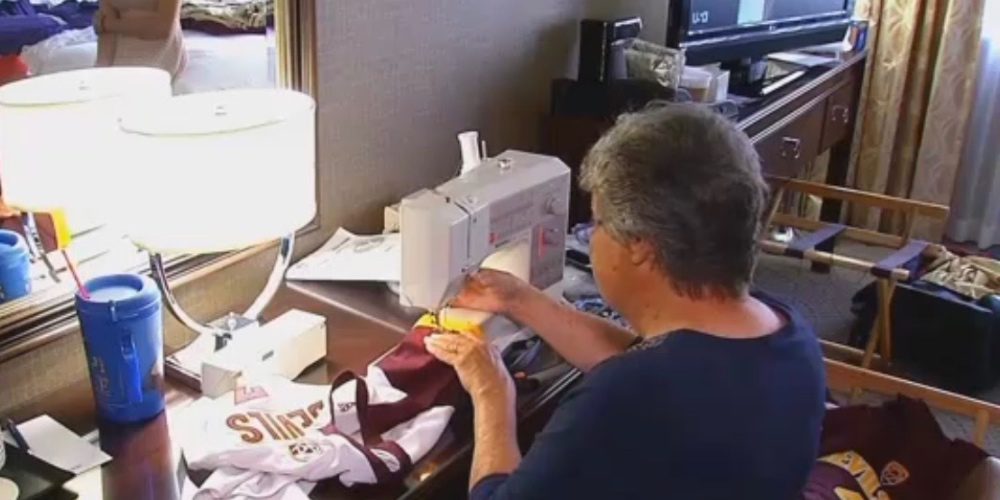 Bledsoe started sewing in 1963. She took a course in high school, and actually hated it because everything had to be done in a certain way. But once she had her first daughter, the mother of four realized the value in craft.

“I decided if we ever wanted to have clothes I would have to learn how to sew,” Bledsoe said. “My mother had made my clothes, so I bought a cheap portable machine, cheap material and a pattern and made my daughter a sundress and myself a maternity top for the second child. That is how it started.”

Bledsoe is always willing to go the extra mile to get the job done. A few years ago when travel delays prevented UCLA from arriving in OKC on time, Bledsoe brought her sewing machine to the ballpark.

She stood in the medical tent and sewed patches on the Bruin uniforms while games were being played.

“They didn’t have a chair for me, but I had electricity and I did two sets of uniforms that night for UCLA,” said Bledsoe, who has also hemmed a few shirts for WCWS coaches. “That is the only time I had anything really major happen like that.”

Unlike the players wearing the patches she sews, Bledsoe never got the chance to live out any athletic dreams. She was diagnosed with polio at age 7 after a trip to the lake with her family.

“One day, I just couldn’t stand up,” Bledsoe said. “We came home and they took me to the hospital. I was in the hospital for nine weeks and had to learn how to walk and write all over again.”

Bledsoe wore braces on her legs for a period of time, and tried to live as normal of a childhood as possible.

“It was a challenge, but you just learned how to deal with it and move on and do the best you can with what you have,” Bledsoe said . “But I have always loved sports because my brothers and sisters all played. I could never play because my leg would get weak and give out when I would run.”

Bledsoe coached her daughters in softball when they were young and umpired youth sports. She still keeps a scorebook at her great grandson’s baseball games.

She has season tickets to University of Oklahoma softball, and attends the games with her husband, who suffers from Alzheimer’s.

Bledsoe purchases 10 tickets to the WCWS every year to take in the action with her family once her sewing duties are done. The group used to include her softball-loving youngest son, but he died last year from cancer that spread to his spine.

Although she takes great pride in each stitch on the uniforms, Bledsoe realizes not everyone is as perceptive.

“When I first told people I sewed patches, they didn’t even realize they even had patches on their arms,” she said with a laugh. “I would say, ‘You didn’t notice my hard work?’ They would start looking once they came to bat.”

Bledsoe is sad she won’t be checking into the Sheraton today. As a volunteer and a fan, she looks forward to the WCWS every year and the electricity it creates around the area.

But she’s still putting her sewing skills to good use. She’s been making masks to give to police officers, nurses and anybody else who needs them for protection during the pandemic.

“Whatever needs to be done,” Bledsoe said. “I told them at church, ‘God gave me two gifts – cooking and sewing – and I am glad to do anything I can in that line of work.’”