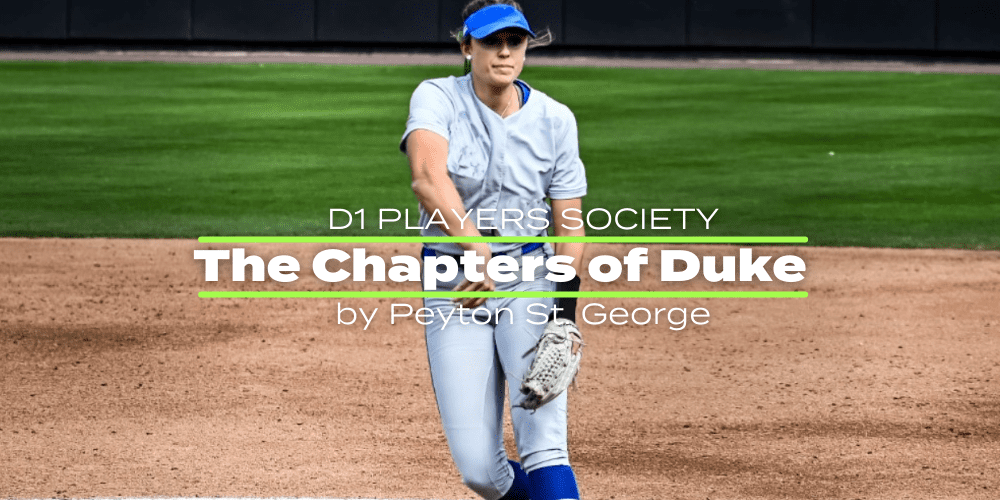 D1Softball, through the D1 Players Society, has partnered with Duke pitcher, Peyton St. George to bring you an inside look at her student-athlete story.

Check out Peyton’s Player Page on our D1PS subsite.

This month, Peyton St. George shares her story and how she has been apart of some important chapters of Duke Softball.

“T4J”, the words stamped above the door that opens to the field from our mudroom. “Today for June” we would say, a group of freshmen and a few transfers playing together for the very first time with the goal of extending our season through June. How do you tell Team 1 of Duke softball to build a culture, acclimate to one of the toughest universities in the world, and make it to the post-season tournament all in their first year? You give them an incredibly disciplined set of team rules, some of the most challenging lifts and practices in all of college softball, and a goal so high that doesn’t allow them to settle for being a “new team” anywhere.

The discipline and work ethic of Duke Softball goes back to Team 1, which has now paved the way for our championship culture five years later. Year 1 was challenging for all of us, we were the “new kids on the block” and everyone made it a point to tell us. On the other hand, lots of teams wanted to play us because we were brand new, and many of them didn’t like the fact that we handed them some L’s along the way. We weren’t supposed to win many games, but to others’ surprise (not our own) we ended our season above .500.

There is a reason this chapter is called the “Terrible Twos”, losing 31 games has a way of leaving a sour taste in your mouth. Our team was full of so much natural talent and skill at this point, but everything was happening so inconsistently that we couldn’t find a good groove as a team on the field. Although we made it to the ACC tournament again, we quickly lost our opening round game and the trip to Tallahassee was cut short.

Still being known as the “new kid on the block” had some challenges, we stacked our schedule to put our team to the test and many times walked away unable to pull out W’s in the 7th inning. Team 2 was full of talent with the addition of some transfers and a year of experience under our belt, but we were still trying to navigate building a new culture and what we wanted to be known for on and off the field. The 180 that was Team 2 into Team 3 is quite remarkable.

Coming back onto campus for Team 3 was like walking into a house that had been remodeled. Head coach Marissa Young was the only remaining coach from Team 2 and we added three new coaches to complete the staff. There is still so much question as to what this group of girls was capable of after having a 23-4 start to the season before COVID suddenly canceled everything. This gave us a lot of time as a team to strengthen our culture and mindsets off the field. Everyone individually worked on their skillset at home throughout quarantine and as a team we got so much closer.

We had just beaten Texas 1-0 to clinch our first ever ranked win and a few short weeks later we were in the weight room a day before our series against FSU was to start when we heard they weren’t traveling because of COVID. Next thing you know, everyone found out their season was canceled in a single tweet and we were told we had to be off-campus within 48 hours. Our team gathered in center field, had a makeshift senior day, and balled for hours.

Following the previous year’s cancellation due to COVID, everyone was hungry to get back on the field with the freshmen class which only increased our depth at every position. Quarantine was long and grueling, but we met nearly weekly over Zoom continuing to build our culture and stay close to one another. Back on campus, nearly every class was held over zoom for most of the year keeping us cooped up in our dorm rooms staring at computer screens every day. On the field, social distancing was required most of the time and there were few times when the team could all be together as we normally would. During travel, we weren’t allowed to stay in the same hotel rooms or eat team meals together which stripped away the off-field moments during the season quite a bit.

Despite all of the daily nose swabs, vaccinations, online class, meals alone, and restriction after restriction, our team was able to remain close and show up on the field when it was time to play. We may not have been able to celebrate home runs at the plate anymore, but we sure did celebrate our ACC championship in dogpile fashion for the entire country to see.

Team 5 returned three grad students using their extra eligibility year, a wicked talented freshmen class, and nearly the same exact ACC championship team as last year. This year has yet to write itself out, but our sights are set on the WCWS. We know that we have the talent, culture, and experience to compete for a national championship, and making history is something we’re not new to anymore. The best is yet to come!

Make sure to follow the D1 Players Society on social media 👇