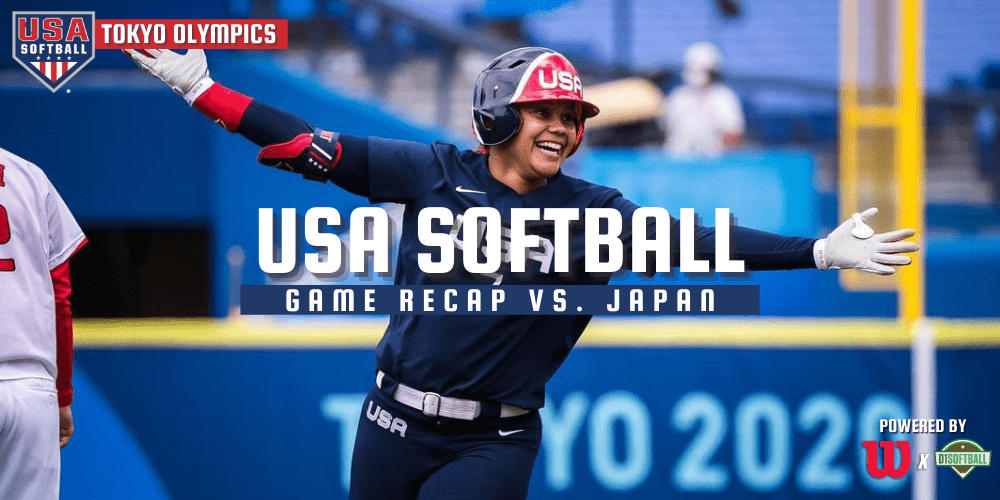 The game meant next to nothing, the opportunity to bat last in the gold medal rematch all that was at stake between the United States and Japan in the final game of pool play.

But Team USA and Japan can’t help themselves. Softball’s greatest rivalry only does drama.

On the verge of being no-hit, a cringeworthy exclamation point on a tournament of offensive struggles, the Americans instead rallied to tie the game in the bottom of the sixth inning.

That set the stage for Kelsey Stewart, who beat Japan with a walk-off single in the 2018 WBSC World Championship, to provide a sequel. Stewart’s walk-off home run was the first home run for her team in this tournament — and only the third extra-base hit. It delivered a 2-1 win that kept Team USA unbeaten.

The big game is still to come (Tuesday, 7 a.m. ET), as the U.S. tries to win back the Olympic gold that Japan took from them in 2008. But here’s what you need to know from a thrilling opening act.

Kelsey Stewart tries to ignite a lineup. It’s hard to overstate just how bad the U.S. offense has looked this tournament. But one double and one triple through nearly 40 innings of play tells the story rather well. They’ve faced good pitching. The heat and humidity are challenges. Few teams are really hitting the ball well. But you don’t get to rely on caveats when you’re the two-time reigning world champions. Not when you’re the United States in softball.

Even the big hits the U.S. got through most of its first five games induced a sigh of relief more than anything else, singles that found a way through infields. Stewart’s blast was really the first hit that brought a celebratory roar out of the Americans. Coming on the heels of three hits in the previous inning, albeit three singles and one of those a dubious scoring decision, maybe the home run is the turning point.

Then again, momentum tends to run aground against Yukiko Ueno.

Valerie Arioto and Amanda Chidester played their part. As in 2018, when RBI hits from Delaney Spaulding and Aubree Munro set the stage for Stewart’s walk-off, others played their part in this game. Haylie McCleney broke up the no-hitter with a leadoff single in the bottom of the sixth, and Arioto eventually brought her home with a game-tying single.

But one of the most important — and most fortunate — at-bats of the game belonged to Amanda Chidester. Batting with one out and runners on first and second, Chidester nearly fouled out — the ball slipping out of Yu Yamamoto’s glove as the third baseman tried to make a brilliant defensive play while navigating around the wall and television cameras. With an out there, McCleney would have been on second base instead of third base when Arioto singled. Chidester then beat out a double play by half a step to extend the inning for Arioto.

Japan holds its ace. While the United States eventually used both Cat Osterman and Monica Abbott in relief of Carda, Japan kept Ueno in reserve. Not that either strategy is likely to have much effect on the final game. This hasn’t been a long tournament, and neither Abbott nor Osterman threw all that many pitches out of the bullpen (one inning for Abbott and two batters for Osterman). Fatigue shouldn’t be an issue.

The move was interesting mentally more than tactically. Using both aces in relief felt like a sign that the U.S. very much wanted the win and corresponding jolt of confidence after its offensive woes. Japan was more willing to give the game its best shot — without using its best pitcher.

Ally Carda was outstanding. It’s difficult to imagine a positive scenario for the U.S. in which Abbott and Osterman don’t throw all the pitches in the final. Then again, Japan has built a righty-heavy lineup in part to take on those lefty aces. And if Ken Eriksen wants to mix things up with a right-handed pitcher at some point in the final, Carda certainly gave him reason to trust her. Despite an early run that scored on a rare Aubree Munro passed ball, Carda struck out eight batters in six innings and looked about as effective as at any point in her international career.