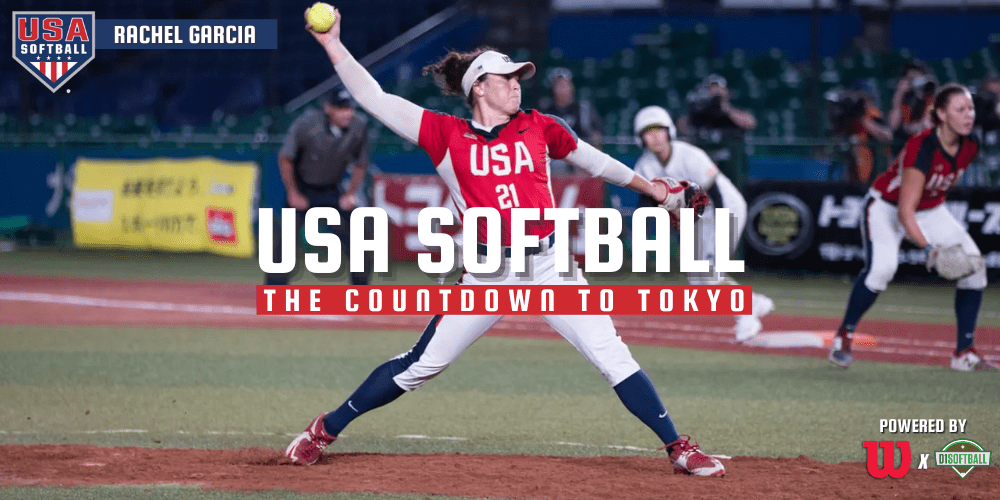 With just 16 weeks to go, we give you the #RoadtoTokyo powered by Wilson, as we feature one U.S. Women’s National Team member each week leading up to the Olympic Games.

Former Olympic Gold Medalist, Jessica Mendoza, sits down with UCLA Softball’s Rachel Garcia to talk about her experience with Team USA and senior writer, Rhi Potkey, with the written story.

Rachel Garcia couldn’t raise her hand fast enough when the special education teacher walked into her sixth-grade classroom at the Palmdale Learning Plaza in Palmdale, Calif.

The teacher asked if anyone wanted to do arts and crafts with her students.

“I was like, ‘Oh, I will do it. One-hundred percent,’” Garcia said. “I just love the energy that comes from helping out people. I have always wanted to do that.”

Garcia’s passion for giving back has not abated with age. The UCLA redshirt senior aspires to work in the special education field once her softball career ends.

Although her success in college has already provided Garcia with a big spotlight, her platform will grow even larger during this summer’s Tokyo Olympics.

The All-American pitcher/utility led the Bruins to an NCAA title in 2019, sweeping all the major Player of the Year awards along the way.

Garcia redshirted last season to tour with the Olympic team until the coronavirus pandemic put an end to all games and workouts.

There was no question in Garcia’s mind that she would return to UCLA this year not only to rejoin her teammates in a pursuit for another national title, but to complete the final credits for her history degree.

Garcia will be the first member of her family to graduate from college.

“It means a lot to me and means a lot to my parents to finish out the school part of it,” Garcia said. “They were very strict on the grades because they wanted me to be successful in life. They believed me finishing college is the most important thing and I 100 percent believe that.”

Softball has been the vehicle that enabled Garcia to attend a prestigious university. She began playing the sport at a young age in rec leagues, and eventually joined the Corona Angels.

During travel ball practices, Division I coaches were stationed behind the backstop with radar guns.

“I was like, ‘Is this for real?’” Garcia’s mother Christine said. “They are watching my daughter do her thing and I realized this could really be something for her. She could go to college and get an education with this sport.”

Garcia started taking American Sign Language classes in high school, and enjoyed it so much she enrolled for more at UCLA.

She loves random encounters that lead to communicating in ASL, including at a Starbucks in Lancaster two years ago.

“I walked in and they were having a deaf night there and I was able to have conversations again,” Garcia said. “It is so cool when you have a moment like that. It’s just such a good experience.”

For all her athletic gifts, Garcia’s big heart is what her family and friends value most. She organized the “Golden League Gives Back” initiative while playing softball at Highland High – a charitable effort that has endured despite her departure.

“I wanted to come up with something to give back to the community in any way possible that wasn’t necessarily softball each year,” Garcia said. “It was always a different thing that we would put on. One year we donated to a women’s shelter and then another year we donated baby supplies. I think it’s amazing they are still doing it.”

Garcia grew up watching the Olympics and idolizing Team USA stars Lisa Fernandez and Crystal Bustos. During a PFX Tour stop in Southern California, Garcia was selected to be a bat girl for Fernandez’s team.

“I thought it was the coolest thing I had ever been a part of,” Garcia said. “Watching Lisa Fernandez on TV and watching her in person are two completely different things. I had to go run her hitting jacket out to her. I was running across the field in flip flops and it was the most intimidating thing ever. But at the same time, it was ‘Oh my gosh. I just ran Lisa Fernandez’s hitting jacket to her so she could run the bases.’”

That’s why it’s been even more surreal for Garcia to have spent the last six years being coached by Fernandez at UCLA.

The two have developed a tight bond, and Fernandez has helped Garcia grow in ways she never imagined possible.

“She is just an amazing person, especially when you are having your worst day. She will make sure you are making the most out of it,” Garcia said. “I am very thankful to have someone like her be a part of this journey for me because I know she has been through it. She has been a great influence in my life.”

Garcia was devastated when softball was taken out of the Olympics, and overwhelmed with joy once she heard it was returning for the Tokyo Games.

“I felt like a weight had been lifted off my chest,” Garcia said. “I just remember at the Olympic tryouts I was so emotional. Even though I probably didn’t show it on the field, deep down inside I was emotional.”

Part of that stems from all the hurdles she’s overcome along the way. Garcia was in the pool for the Junior Olympic team in 2015, but tore her ACL as a senior in high school and wasn’t able to participate. She’s endured five surgeries since the injury.

“It just amazes me how she bounces back and gets back out there and does what she does,” her mother said. “She could have easily been done after that ACL. That was a tough first year in college. It was very tough on her mentally and emotionally. She went through depression, but she bounced back and I am super proud of her.”

Once Garcia received the email letting her know she’d made the Olympic team, she called her parents. Garcia was in Oklahoma City having just completed tryouts and they were back in Southern California.

“It was 6 in the morning, but I knew my dad was already awake getting ready to leave for work,” Garcia said. “I don’t even think I got two words out before we all started crying on the phone. I just remembered how I cried tears of joy.”

Although having the Olympics postponed for a full year was frustrating, it seems almost fitting for Garcia. Her softball career has always required a little extra patience that led to even greater appreciation for the glory.

“Everything just keeps getting delayed for her – her college career starting and now the Olympics,” her mother said. “But it’s been a dream of hers and now she gets to live that dream. We may not be able to be there in person to see it, but she will be going and that is all that truly matters.”