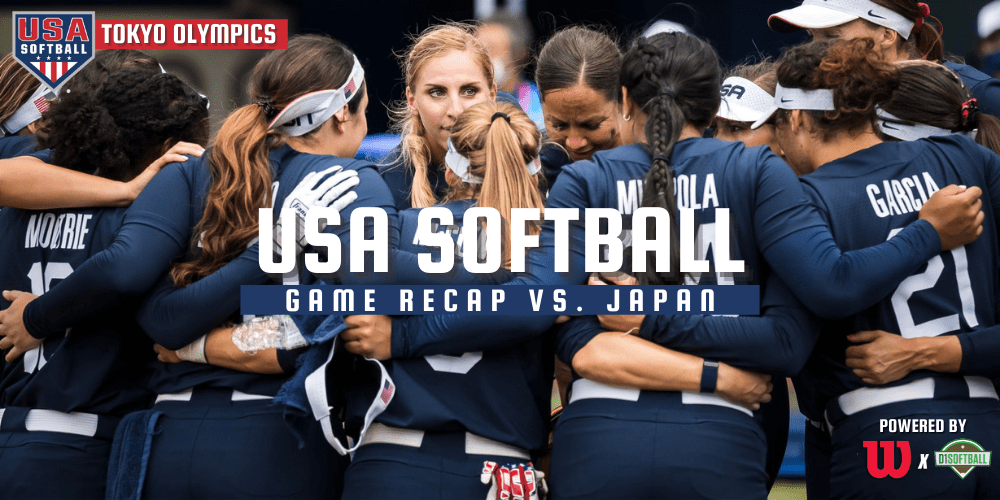 The United States can beat almost anyone in softball. It still can’t beat Yukiko Ueno.

Ueno led Japan to a second consecutive Olympic gold medal by teaming with Miu Goto to shut out the United States 2-0 in Yokohama. The repeat is all the more impressive because the 39-year-old starter had to wait 13 years to show the world that her first gold medal gem against the sport’s longest standing dynasty wasn’t a fluke — and because the reliever who gave Ueno a breather this time was 7 years old for Japan’s first win.

The tournament’s most prolific power hitting team in pool play, Japan instead manufactured runs to beat a trio American pitchers in the gold medal game.

Those runs proved more than enough against an American team that struggled to produce runs throughout the tournament and generated few scoring opportunities against Ueno in the final.

Ueno pitched five scoreless innings to start the game, allowing just two hits, before yielding to Goto after a leadoff walk in the sixth. But with the gold medal on the line, Japan’s ace returned for the bottom of the seventh inning and set the Americans down in order.

Cat Osterman started for Team USA, as she did in 2008, and allowed two hits in two-plus scoreless innings. Carda pitched 2 and 2/3 innings, allowing three hits and two earned runs (she was responsible for the run that scored on Fujita’s hit). Abbott pitched the final 2 and 1/3 inning, allowing three hits.

Already the only nation other than the United States to win gold in softball, Japan joins the U.S. as the only teams with multiple golds.

Here’s what you need to know from Japan’s triumph.

Yukiko Ueno is a sporting marvel. In the fifth inning, when Fujita drove Japan’s second run, cameras caught most of the Japanese players celebrating joyously. All but Ueno, who cameras then showed tucked away in the corner of the dugout, a trainer massaging her pitching arm.

At 39 years old, you let the kids celebrate. You just make sure the arm keeps working.

Softball’s Olympic era spans a quarter of a century, from the sport’s debut in 1996 to its return after a lengthy hiatus in 2021. For most of that time, 15 of 25 years, Ueno has alternately overwhelmed, outlasted and outfoxed almost all American challengers.

Still a youngster, she beat Team USA in a semifinal of the 2006 ISF World Championship before losing the rematch in the final. She then famously swung the pendulum back in her favor by beating the Americans for gold in the 2008 Olympics. And she proceeded to win two of the three World Championships in which she competed during the sport’s Olympic hiatus.

Beginning with the 2008 Olympics, that’s five gold medal games against the United States. And four wins for Ueno. In the end, the only redemption that played out in Yokohama was for Ueno and Japan. They suffered their lone gold medal loss together in that span on home soil in the 2018 WBSC World Championship.

Thanks to her, Japan’s reign as Olympic champions will last for at least 20 years.

Atsumi saved more runs than she drove in. In a game full of defensive gems, including brilliant plays from Michelle Moultrie, Janie Reed (whose fence-climbing snag in the seventh inning was the best of them all), Delaney Spaulding and Ali Aguilar, Atsumi had the most important play. She not-quite-single-handedly snuffed out a Team USA rally in the bottom of the sixth inning.

With runners on first and second and out out against Goto, Amanda Chidester lined a ball toward thrid base. The ball caromed off Yu Yamamoto’s forearm and into Atsumi’s glove. She alertly threw the ball to second base to complete the unlikeliest of inning-ending double plays.

The offense never got going. Given Chidester’s misfortune, maybe it just wasn’t in the stars for the Americans. And to be fair, this wasn’t a tournament for offense. Canada hit .243 en route to winning bronze, and that was the best showing of any of the medal round participants.

Still, despite two walk-off hits in pool play, Team USA looked particularly out of sorts at the plate in the tournament. Reed’s first-inning triple against Ueno in the final offered some hope that the U.S. might ride the momentum of Kelsey Stewart’s walk-off home run in the pool-play win against Japan. But Reed was subsequently nabbed at the plate trying to score on a wild pitch, Ueno blocking the plate with her foot and applying the tag, and the U.S. managed just two more hits in the game.

There will always be arguments for players left at home when the roster is as small as it is for Olympic play, but it’s difficult to make a convincing case that team selection doomed the Americans. Instead, the unsatisfying explanation may have more to do with the sum total of good pitching, difficult conditions, a lack of training time during the yearlong pandemic delay and the sheer bad luck of a small sample size in a sport in which failure is baked into the act of hitting.

Play this tournament 10 more times and Team USA would likely score more than nine runs in almost every instance. In this instance, the hits just didn’t come.

Countdown to 2028 begins. Softball won’t be part of the program when the Olympics move to France in 2024. It’s assumed, although not confirmed, that softball and baseball will return when Los Angeles hosts in 2028 (with optimism that the sport will also find a home in 2032, now that Brisbane, Australia is set to host).

Abbott and Osterman won’t be there in seven years (although if anyone could pitch into her 40s, it’s Abbott). Seven more years is presumably also a bridge too far for the likes of Val Arioto, Carda, Chidester and Moultrie. But the trio of Rachel Garcia, Dejah Mulipola and Bubba Nickles, who all saw limited time for this team, could prove a base to build around. Even Haylie McCleney, who would turn 34 shortly before the 2028 Games, might stick around for another shot at gold, leading a new generation.

The next significant international competition will be next summer’s World Games in Birmingham, Alabama, with the WBSC Women’s World Cup postponed until 2023.