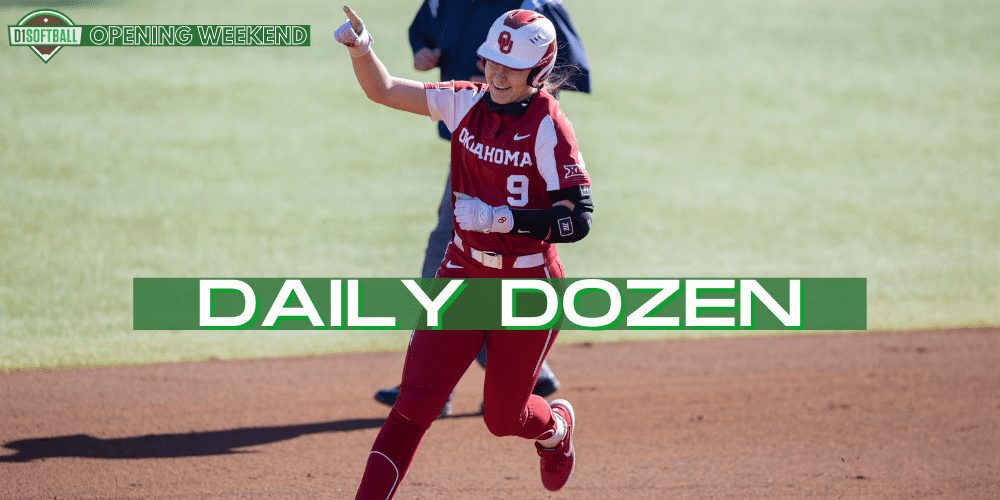 • The NCAA released a promo video that will make you weep with joy. Enjoy the history. Enjoy the road to OKC.

• Arkansas’ redshirt senior Braxton Burnside recored her third career two-homer game to lead the Razorbacks offense with four RBIs. Burnside came out swinging in the first, blasting a 0-0 pitch over the fence to give Arkansas the early lead. The second homer was a towering three-run shot to regain the lead in the bottom of the sixth, giving Arkansas a 11-10 edge.

• The opening day’s best pitching performance? It might have been Illinois State senior Morgan Day striking out 12 and shutting out North Florida. She’s averaging 8.48 strikeouts per seven innings since the start of her sophomore season. Only five active pitchers have a better career strikeout rate — all from power conferences.

• Abilene Christian didn’t break any NCAA records in a 13-6 win against UTEP, but Samantha Bradley will remember the day just the same. After hitting five home runs in her first four years of college softball, which included sitting out seasons at both Louisiana-Lafayette and Abilene Christian and the pandemic-shortened 2020 season, she hit two against UTEP. For good measure, she got the win in the circle.

• Alabama head coach Patrick Murphy used the ‘Slide’ into my DMs invitation that some college basketball coaches have perfected to schedule last minute games. It worked. Within a few hours, the Tide were back on the weekend schedule.