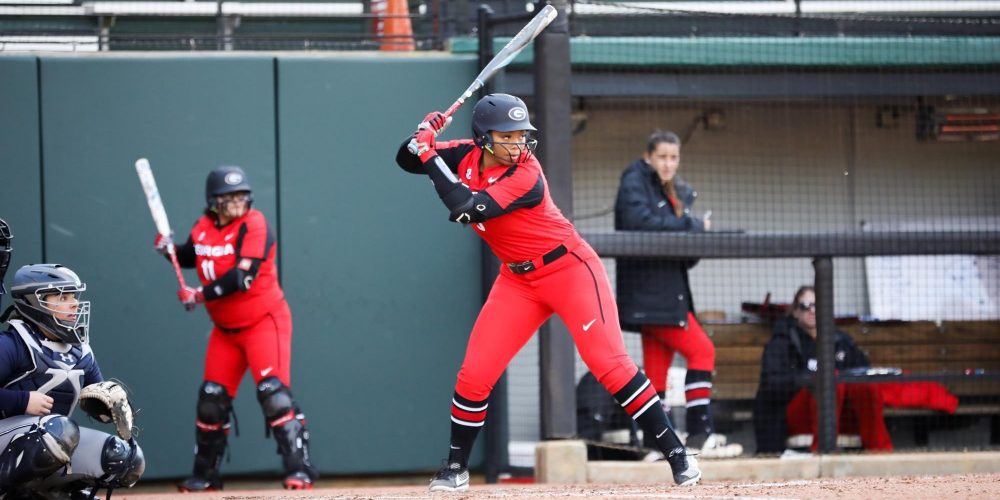 In the end, Jaiden Fields got the run back. And stopped Oklahoma’s winning streak in its tracks.

After an earlier miscue on the bases in which she lost a home run after she failed to touch home plate, Fields’s two-out single in the bottom of the ninth inning brought home the winning run in Georgia’s 7-6 win against No. 1 Oklahoma.

The loss snapped Oklahoma’s 40-game winning streak, third-longest in NCAA Division I history and seven shy of Arizona’s all-time record. The Sooners’ streak included a 33-0 start in 2021, two shy of the best Division I start to a season.

Oklahoma outscored opponents 444-66 during the streak.

Georgia appeared to take control when Fields, sister of NFL prospect Justin Field, hit a two-run home run off Giselle Juarez in the bottom of the fourth inning to break a 1-1 tie. But in her excitement, Field stepped over the plate without ever touching it after rounding the bases. She was called out, the hit officially reduced to a one-run triple and Georgia’s lead trimmed to 2-1.

Coming off three consecutive run-rule wins in a weekend series against Texas and boasting one of the most prolific offenses in history, Oklahoma soon punished the Bulldogs for the mistake. With two strikes, two outs and still trailing 2-1 in the top of the sixth inning, Oklahoma’s Lynnsie Elam bounced a grand slam off the top and eventually over the outfield wall for a 5-2 lead.

Fields cut the deficit to 5-4 with a two-run single off Shannon Saile in the bottom of the sixth, but her earlier lost run still loomed large. But after Oklahoma added a run in the top of the seventh, Georgia scored two runs with two outs in the bottom of the seventh on hits by Sydney Kuma and Sara Mosley to send the game to extra innings —  only after Fields made the third out with the potential winning run on third base.

Georgia’s Mary Wilson Avant, who pitched all nine innings, retired the Sooners in order in the eighth and ninth innings. That set the stage for Fields to deliver the walk-off single, with Georgia coach Lu Harris-Champer sending pinch runner Jacqui Switzer from second on a ball to left field and winning the gamble when the throw was too far up the first base line for a play at home.

Fields made up for her miscue and never did have to touch the plate.

A third-year sophomore who played just 16 games in her first two seasons due to a combination of a redshirt and the pandemic-shortened 2020 season, Fields finished the game with three hits and three RBIs. It was just the second three-hit game of her young career.

Georgia is taking on the role of streak-buster in college softball. In addition to ending Oklahoma’s winning streak this season, Georgia ended Florida’s bid for three-peat national championship in 2016, stunning the Gators in a super regional on Kaylee Puailoa’s walk-off home run.

Grace Lyons also hit a home run for Oklahoma, which had gone so long without a setback that its most recent loss actually came on a Leap Day — a 4-3 defeat against North Texas on Feb. 29, 2020.

Remarkably, the Sooners don’t even get to settle for a program record winning streak. Some of these same Sooners helped set that mark by winning 41 in a row between Feb. 24 and May 19, 2019.

The current Sooners immediately started a new streak by beating Georgia 12-3 in Tuesday’s nightcap. The Sooners piled up nine walks and eight hits in the win, Jayda Coleman and MacKenzie Donihoo each driving in four runs.

At 34-1, Oklahoma still has the best winning percentage in Division I, James Madison (22-1) the only other one-loss team. Georgia is now 28-12, including 21-9 at home. That includes wins against Oklahoma, Florida, Kentucky (twice) and Missouri (twice), keeping the Bulldogs in the running for a national seed in the NCAA tournament.