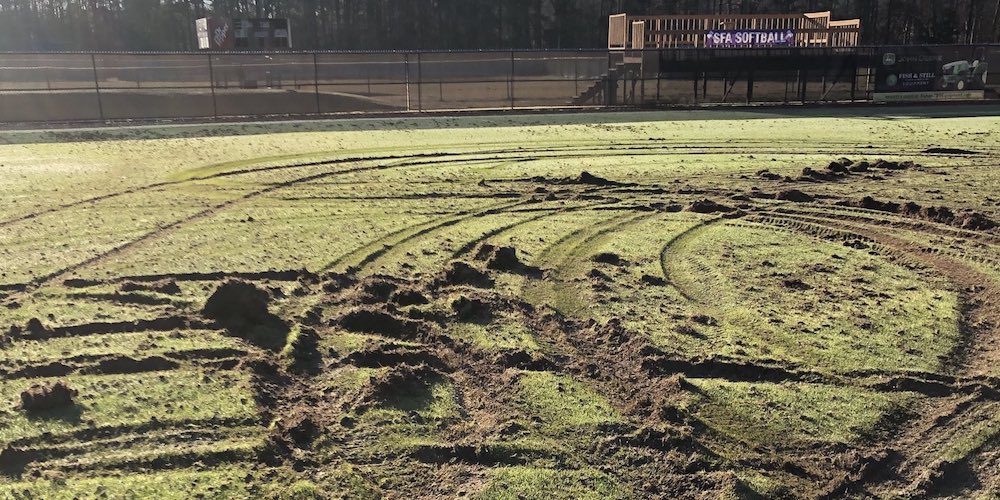 Nicole Dickson tried to hide the shock on her face when she arrived to survey the damage. The Stephen F. Austin head coach had just returned from the holiday break in early January, and received a phone call from SFA baseball coach Johnny Cardenas at 7:20 in the morning. He told her the softball field at their off-campus facility in Nacogdoches, Texas had been vandalized. At least two trucks had driven onto the field and did donuts in the outfield grass. They left deep tire tracks along with trash and beer cans strewn everywhere. Damage was estimated at $3,000.

“It took everything in me not to cry when I first saw it,” Dickson said. “I don’t think people realize both softball and baseball maintain our own facilities. We mow it, edge it, water it, drag it. There is a lot of hard work that goes into it year-round.”

SFA worked furiously to have the field ready for the team’s home opener scheduled for today against Texas Southern. But the Ladyjacks were given an extension with the game being canceled because of rain. They hope the field is ready by Feb. 19 when they host Prairie View A&M.

Rain and lack of sun has hampered the process of replacing and repairing the damaged spots in the outfield. Dickson doesn’t want to put players at risk of injury until the field is ready. The school got a bid from a company in Louisiana to replace the outfield, but the price was too steep at $50,000.

“We have grass growing, it’s just not growing fast enough,” Dickson said. “We actually took some balls on it and I am not worried about the ball playing true. It’s just slow, and we are mainly concerned about the kids being comfortable turning and going and tracking the ball.” 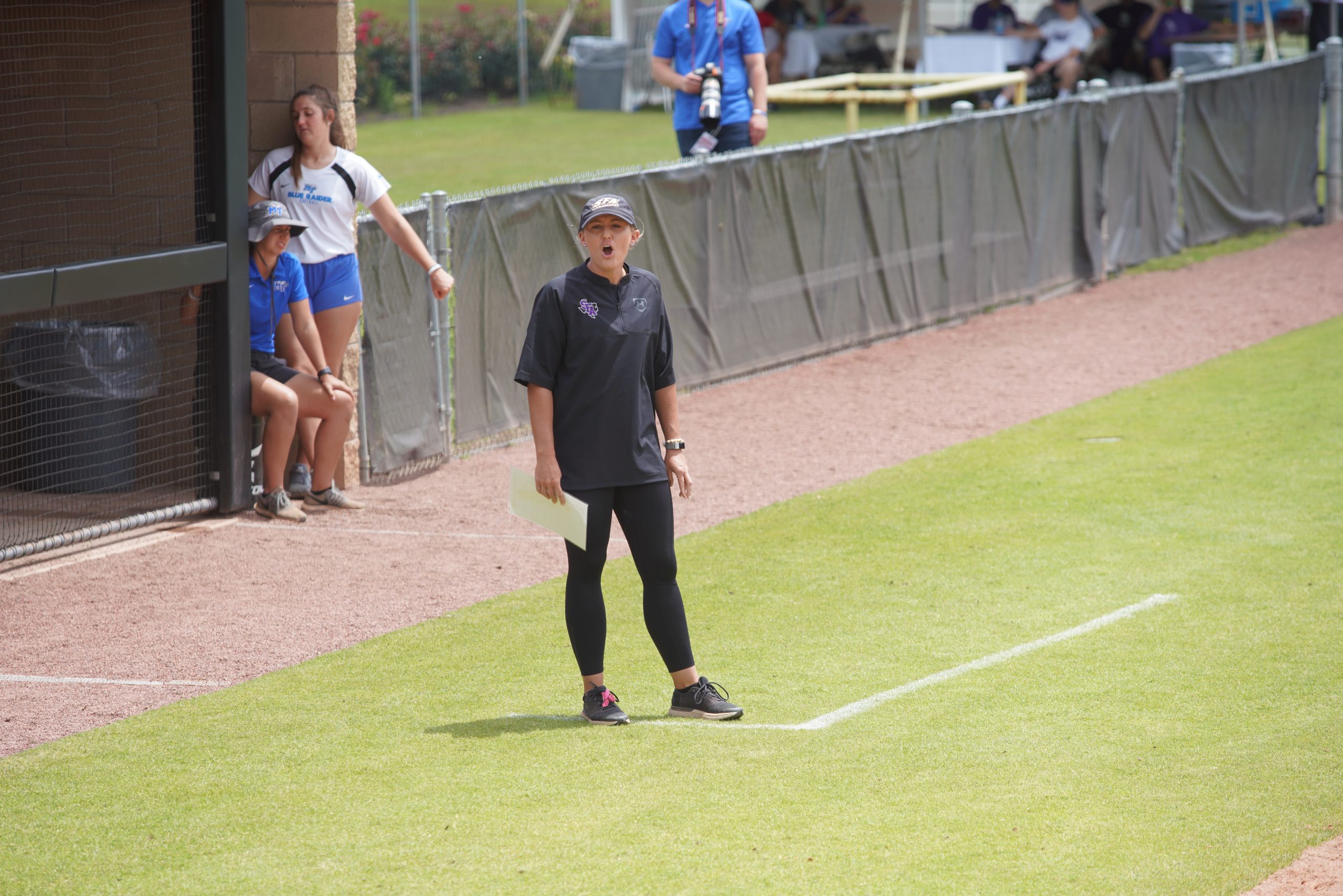 SFA is ready to return home at some point over the next week. (SFA photo)

SFA has an exclusive lease from the city to use the facility, which is located three miles from campus. Without anywhere to practice for the last month, the Ladyjacks have resorted to using the school’s turf football field at Homer Bryce Stadium.

They set up camp by the Jumbotron near the end zone, taking cuts and fielding grounders as other athletes practiced around them.

“We have a full field set up and are trying not to smoke a track runner who is an All-American with a softball,” Dickson said with a laugh. “Track and football have been great letting us work down here, and it’s nice being on campus and around other teams. Our kids have really enjoyed that.”

The Ladyjacks didn’t let the practice conditions negatively impact their performance in the season-opening ULM Tournament. SFA finished 4-0, outscoring opponents 30-3. Kriesel, a senior right-hander from Houston, recorded a program-record 19 strikeouts while throwing a no-hitter in SFA’s 3-0 victory over Southern University.

“Our kids have had a great attitude,” Dickson said. “They have been super flexible with our training and have made it easy to get in reps.”

Although the damage to the field had been done, SFA was able to get a little closure on Jan. 15th, when deputies with the Nacogdoches County Sheriff’s Office arrested two men who allegedly were the main culprits in the vandalization “We are really proud of our facility, and it just kind of a shock that somebody would do such a thoughtless act,” Dickson said. “It’s really sad they were not thinking about who they were hurting or affecting.”

Dickson has been heartened by the outpouring of support the team has received once news about the vandalization spread.

“The response that we got from our alumni, like former players, coaches and managers, has been really impressive,” Dickson said. “To see how many people are truly invested and truly care about SFA has been very special, because at SFA we are about culture and family. When something drastic like this happens, it’s nice to see the true colors come out and have people want to help.”

SFA’s last and only NCAA appearance was in 2008, and the Ladyjacks are determined to end the drought this season.
Not having their field for more than a month isn’t how they expected to begin the quest, but the Ladyjacks have managed to find perspective and increased camaraderie amid the deep tire tracks of destruction.

“The best thing about it is we have learned a lot about our team in the last three weeks, about how they handle adversity and how adaptable they have been,” Dickson said. “They are not complaining or making excuses. Has it been comfortable or easy? No. But we’ve been able to train and we are ready to go.”

〈
Previous Article Inside The Dugout: Howard Deals With Unique Challenges
Next Article Opening Weekend 2020: What We Learned
〉