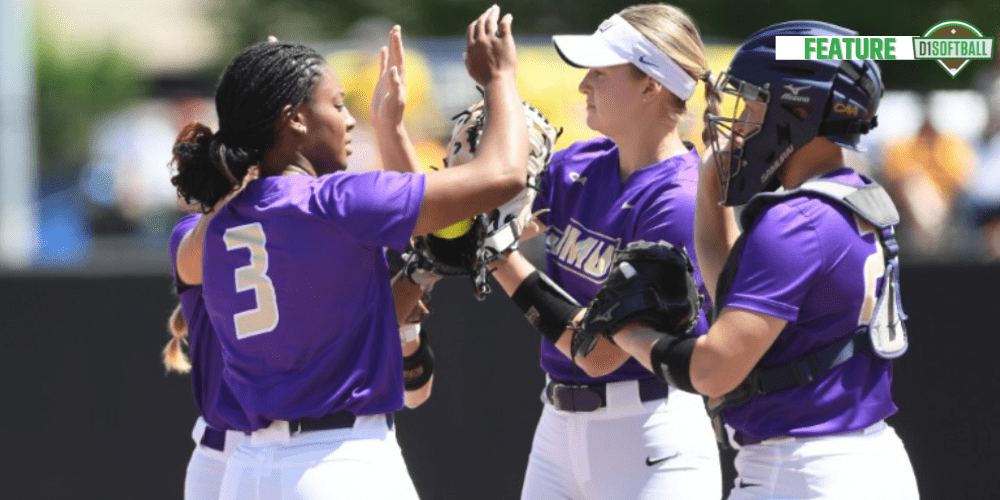 The first batter Odicci Alexander faced in the biggest game of her life hit a home run.

Alexander struck out the next batter on three pitches. The one after that fanned on four pitches.

Then Alexander again ran into trouble in the bottom of the first inning of Sunday’s winner-take-all finale in the Columbia Super Regional. A hard-hit single, a wild pitch and a walk put runners on first and second. As the midday sun beat down on her, not much more than 12 hours after she walked off the field following one of the most disappointing losses of her career in Game 2, it was easy to wonder if James Madison’s run might have reached its natural conclusion.

Perhaps asking Alexander to face the same SEC opponent for a third day in a row, each time in front of boisterous crowds after a season spent playing mostly in silence, was asking too much.

Except that just before stepping onto the rubber for the 2-2 pitch, Alexander grinned ever so slightly — one of her first displays of emotion in the inning. Maybe a teammate said something. Maybe she heard someone in the stands. Or maybe she knew people out there were thinking about the clock striking midnight on college softball’s Cinderella.

She got her third strikeout of the inning on a 68-mph rise ball and calmly walked off the field without so much as a fist pump. Midnight is for fairytales. She planned on sticking around as long as needed.

And as perennial mid-major success James Madison makes its first trip to the Women’s College World Series, Alexander is right where she belongs.

Even some softball fans got their first extended look at Alexander the past two weeks. Many sports fans will meet her for the first time when she steps on the field in Oklahoma City. But as her coach with the Beverly Bandits travel ball team, Chad Moran has watched this for years.

“CC is defined by her swag,” said Moran of the player most call by that nickname. “Anybody who watched her [in the super regional against Missouri] could see it, there’s no moment too big for her. That’s why I’m excited for her to get to Oklahoma City. A lot of times people will be looking at a mid-major thinking ‘Can they handle the pressure? Can they handle this?’

“Well, I don’t know if Oklahoma City is going to be able to handle CC.”

An ace among equals in OKC

That competitive confidence is backed up with a whole lot of production. Alexander enters Thursday’s game against No. 1 Oklahoma with a  16-1 record, 1.14 ERA, 0.78 WHIP and 186 strikeouts in 117 innings in 2021. That despite the Dukes not playing a game until the season’s third weekend and Alexander subsequently missing a month with a hamstring injury.

Despite playing in the SEC, Tennessee and Missouri were 43-13 at home against everyone who wasn’t Alexander. They were 1-3 against her. She is only the fourth pitcher to reach the World Series after beating national seeds on their fields in the regional and super regional rounds.

She’s been very good since she arrived in Harrisonburg, compiling a 79-16 career record, in large part as the perfect complement to All-American Megan Good. But she has never been better than in the super-senior season permitted as a result of the COVID-19 pandemic.

“The thing about CC is that she is a high velocity pitcher and she has a lot of different stuff,” James Madison coach Loren LaPorte said. “She is really good east to west, she’s good up and down, and she’s developed a changeup that has been a game-changer for her all year. And she’s confident in it, and I think that’s the biggest thing for her.

“At the end of the day, she’s the one throwing the pitch and she’s done a really good job at working with [assistants Jennifer Herzig and Libby Morris] and figuring out how to attack hitters.”

If she had a flaw in the past, as with many pitchers who throw a fantastic rise, it was that she paid for the occasional mistake. As a result of that changeup, she’s allowing an extra-base hit just once every 25 batters in 2021, compared to once every 16 batters in her previous seasons.

All of which will make people ask why Alexander is pitching for a school that plays in the Colonial Athletic Association instead of the likes of the ACC, Big 12, SEC or Pac-12 — the other conferences represented in Oklahoma City this week.

Some of it is geography. She is from a few hours south of James Madison in Virginia (previous JMU standouts Good and Jailyn Ford were also in-state products, as was Angela Ticher, who led Virginia Tech to the 2008 World Series at a time when only Florida State’s presence made the ACC a major conference).

But it’s also further evidence that “good” and “big” aren’t synonymous when it comes to choosing programs in the recruiting process. Like Louisiana-Lafayette, a program with sustained postseason credentials that stretch well beyond a single special player or class, James Madison has become an influential program in everything but conference affiliation over the past decade. That started under the leadership of former coach Mickey Dean and continued when LaPorte ascended to the top spot when Dean left for Auburn.

Formerly the coach of the NPF’s Chicago Bandits, Dean had longstanding ties with the travel program of the same name. A Chicago-based entity that itself helped expand softball’s landscape, the Beverly Bandits are almost as much a part of James Madison’s success as the OC Batbusters are a part of Oklahoma’s current success. Alexander, Sara Jubas and Lynsey Meeks played for Moran’s Cincinnati-based Bandits team, while starters Kate Gordon, Madison Naujokas and Hallie Hall also played for Bandits teams (Moran’s daughter Madyson played for James Madison’s first super regional team in 2016).

Alexander taught herself pitching, watching Youtube videos and throwing against targets she painted on a well at the house where she lived with her grandparents. And whether or not she was overlooked as a late bloomer who Moran admitted might have had more confidence than polish early on, she didn’t need a Power 5 program. James Madison offered people she knew, proximity to home and a chance to play meaningful May softball.

Among the tangible benefits is that Alexander got to be a dual threat at James Madison. Alabama is doing just fine with Montana Fouts, another Bandits travel ball alum, focusing solely on pitching, but she, too, was a prodigious prep hitter. Even with Rachel Garcia representing the dual-threat lineage of legends like Lisa Fernandez, Jennie Finch and Keilani Ricketts, most of this season’s World Series aces are pitching specialists.

At a mid-major, no one is going to turn down a chance to get essentially two starters for one scholarship. And just as Good and Jailyn Ford thrived as two-way talents, Alexander is hitting .343 with a .975 OPS this season and has 39 career home runs.

“If she had went to an SEC school, even though she’s probably good enough to hit at one of those schools, well, they’ve got a lot of other good hitters,” Moran said. “So they might have just had her pitch. At JMU, you’ve got a better chance to do both things. But CC would have been a Division I player even if she didn’t pitch at all. She’s a good enough hitter to do that.”

Because of the late start and her injury, Alexander threw 32 percent of her innings this season in the 10-day stretch between the start of the regional in Knoxville, Tennessee and the end of the super regional in Columbia, Missouri. She started all six games the Dukes played, which is less an indictment of a talented understudy in freshman Alissa Humphrey than a testament to the importance of a fifth-year senior whose 5-foot-7 frame belies a Ruthian presence.

Tincher carried Virginia Tech to the World Series as essentially a one-woman team. That isn’t James Madison, which is second only to Oklahoma among World Series participants in scoring and slugging percentage this season. But what people tuning in to James Madison for the first time this week will see is a team that follows Alexander’s lead.

“They need to understand that she is gritty,” James Madison outfielder Logan Newton said. “Whether she is on or off she’s going to fight until the last out. Pitchers like that are scary because she has so much faith in our hitters — and we have so much faith in her — that if she can keep us in the game, we’re going to win it for her.”

The last team to win the World Series in its debut was Oklahoma in 2000. The last unseeded team to win its opening game was Louisiana in 2008 (when Ashley Brignac matched Alexander’s feat of beating seeds on the road in the regional and super regional rounds).

And even that history is far less daunting than a present that involves facing Oklahoma and the most prolific offense in the country — perhaps the best offense in the sport’s history.

It’s easy to style it as David and Goliath, except James Madison isn’t bringing slingshots and isn’t interested in playing the role. Alexander and her teammates went to James Madison because it was an opportunity to play for one of the best programs in the country.

Oklahoma City best be ready for them and their ace.

Great article. I will be watching to see if her swag is enough to beat Oklahoma, and I will be rooting for her and the Dukes.

It was that and more.