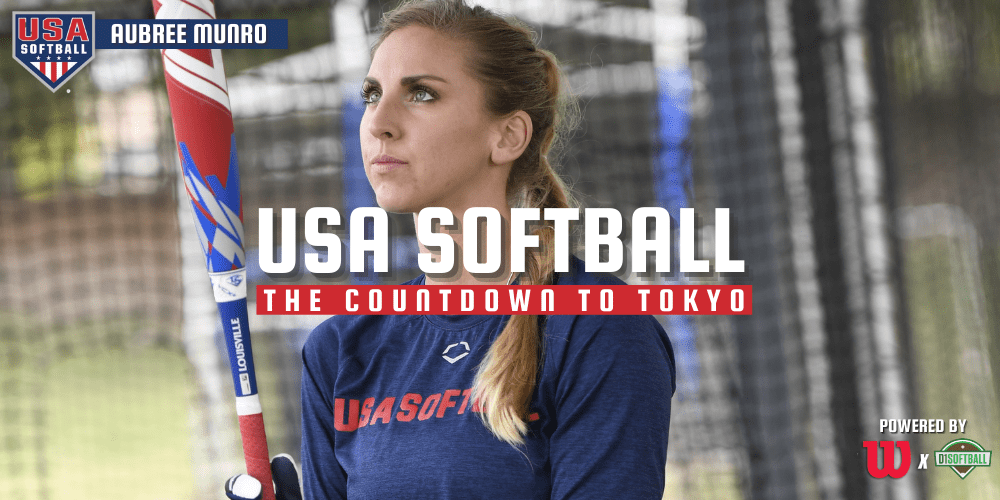 The catcher was in tears before the pitch reached the plate. As coach of the 8-and-under team, Denise Morris confronted the kind of dilemma that giants of the profession never encounter.

What are you supposed to do when your catcher is scared to catch the ball?

Morris turned to the one replacement she knew she could stick behind the plate without fear of hearing from an irate parent: her own 6-year-old daughter.

A little more than two decades after that debut, Aubree Munro will again fasten her shin guards, slip on her mask and take her position behind the plate. This time for Team USA in the Olympics.

Back in California all those years ago, Munro was two years younger than hard-throwing pitcher: future Texas A&M hurler Jenna Stark. Munro was only on the team at such a young age because her mother, a former softball player from a softball family, couldn’t stand the thought of watching even one more insipid inning of tee-ball. Morris figured Munro could play an inning or two in the outfield for the older team she coached and ease into full-fledged competition.

Munro’s mom told Stark not to go easy on the new catcher. The first pitch sizzled in and thudded off Munro’s chest protector without touching the leather of the mitt. Morris hurried out to check on her daughter’s welfare. Unperturbed, Munro said that she was fine. She hadn’t felt a thing.

The next pitch sped toward the plate and clattered off Munro’s face mask, again unbothered in its flight by any contact with the catcher’s mitt. Again a guilt-ridden mother hurried onto the field. Munro reiterated she was fine.

Try to move the glove toward the pitch, her mom advised. In other words, try to catch the ball.

“I think the whole first game the ball just hit her in the chest and she just let it drop in front of her and threw it back,” Stark recalled. “I don’t even think she tried to catch the ball. But I could throw it straight, so it would hit her.

“It was perfect because she didn’t cry or anything and all of the other girls did.”

In weeks and years that followed, Munro pitched a little. She played some third base. But those were temporary diversions. From that first encounter, she was a catcher. She became perhaps the best defensive catcher the college game ever knew. She managed the different skills and personalities of dominant staffs on championship teams at the University of Florida. She stopped opponents in their tracks on the bases — the stories people tell about her arm sound like the tales told about Crystl Bustos taking batting practice. The stuff of folklore.

“I guess it’s just the place where I’ve been the most comfortable,” Munro said some years ago of a life behind the plate. “My mom always jokes that if I’m ever having a hard time, just go play catch. Go put your catching gear on. Go to the softball field and you’ll figure it out.”

She was a superhero when she put her mask on. Catching lifted her from recruiting obscurity to national titles at Florida. It carried her all the way to Team USA. But if the Olympics are an opportunity to showcase a skill perfected, they are also a chance for the world to see the woman behind the mask. Maybe she was born to catch. She grew into much more than that.

“She has always been the catcher — Aubree Munro the catcher,” Ally Carda said recently. “She has a canon and is a great receiver and all these things. But she’s been working on being Aubree, the great all-around player. She’s been working on her hitting and offensive approach and her relationship with all of us as pitchers. She has been going above and beyond for the past few years on trying to be a better all-around softball player. And she’s done that.”

Softball was less a status marker for Munro and her mom than connective tissue in the family. Morris learned the game from her own dad, who played fast-pitch softball growing up on the East Coast and brought the knowledge with him when he moved to California.

Morris was a good enough pitcher herself to garner interest from a college program like Cal State Fullerton, a World Series regular for much of the sport’s early NCAA years. She didn’t pursue it. Some of it might have been burnout. Some of it was the realization that she was a hard thrower who wouldn’t be able to get away with a limited repertoire at the college level. A lot of it was just that she didn’t want to play if her dad wasn’t going to be the coach.

“I was playing for my dad, and I didn’t really want to play for anybody else,” Morris said. “I loved playing for him. I have so many memories of just looking at him from the pitching mound.”

The same way Munro looked at her mom from behind the plate.

The travel ball teams for which Munro caught and Morris coached rarely played the giants of the circuit. It was just softball. Competitive enough but not cutthroat. Yet as time went on, even Morris suggested that it was time to try a higher level. Pregnant with twins, she told Munro she wasn’t sure if she could keep coaching. Munro didn’t want to play for anyone else.

“I think Aubree is a creature of habit and someone who likes being really comfortable,” said Jen Schroeder, noted doyenne of catching instruction and Munro’s mentor. “Her grandpa was her inspiration and her mom was her driver. Her mom tried to let go of the reins earlier in her life, and Aubree was really resistant to it because she was comfortable in her space.”

It wasn’t until midway through high school that she even showed up on the recruiting radar. Even then, she ended up at Florida only because Tim Walton turned to defense in an effort to diversify teams that kept piling up runs and wins in the regular season before falling short in Oklahoma City. A lot of top programs weren’t interested in a lanky, late-blooming catcher with a questionable bat. A year or two earlier, Florida might not have been. But in that moment, with some help from Francesca Enea’s mom as unofficial recruit, Munro was a must-have.

Former major league catcher Doug Mirabelli spent time on Florida’s staff when Munro was in Gainesville and marveled not just at the obvious arm strength but her mastery of nuances.

“If you watch her block, every ball bounces either in her glove or right in front of her, within inches of her,” Mirabelli said at the time. “She is very good at taking the energy out of the ball when she blocks it, keeping it close to her. So almost in one movement she can block the ball and be ready to throw to any base, where typically in baseball you would need to pick it kind of like a first baseman.”

That might have been enough for some, to prove she belonged at a program like Florida. It was certainly enough to help the Gators win back-to-back titles. But Munro wanted more.

“One of my biggest problems when I came to college was realizing that I spent so much time and effort in being the best catcher that I could be,” Munro said. “And then I realized ‘Oh wait, I need to be a better hitter, too.’ If I wanted to really be able to showcase my talents as a catcher, I had to get in the lineup.”

She did that well enough as time went on with the Gators, totaling 24 doubles and eight home runs over her final three seasons. But what much of the softball world didn’t always see in the intervening years, as she followed the itinerant pro circuit from USA tours to the ScrapYard Dawgs and Athletes Unlimited, is Munro emerging as the kind of hitter you trust in big spots.

Never was that more evident than in the 2018 World Championship. Before Kelsey Stewart delivered the walk-off hit to beat Japan in the bottom of the 10th of the final, Munro’s double of Yukiko Ueno tied the game and left runners on second and third. She hit .389 with three home runs, two doubles and eight RBIs in that tournament—including a home run in the semifinal against Japan that clinched Olympic qualification even before the extra-inning finale.

The Woman Behind the Mask

“She knows how to tap into human beings,” Schroeder said. “She’s selfless in the way that she is able to connect with humans and bring out the best in them. That is by far her best quality.”

Sometimes that’s just keeping a pitcher loose in the circle. Sometimes it’s finding the right words — and listening — in difficult moments, as when she was part of the This Is Us movement that came when ScrapYard players felt marginalized during last summer’s social justice awakening. Or it’s speaking to youth about her faith. Sometimes it’s being a daughter. Together with her mom and older sister, Aarika Ure, Munro launched The Born Ready Team in 2017. Dedicated to Morris dad, it seeks to instruct and inspire young athletes to be ready for anything.

Maybe even catching a hard-throwing pitcher at 6 years old.

Catching shaped her. When she was a gangly, slightly awkward kid, it encouraged her to be speak up. It gave her a voice. Catching taught her to be bold, to use the arm that genetics, good fortune or the heavens gifted. It gave her confidence. But the mask didn’t transfer superpowers when she put it on for the first time as that 6-year-old replacement. It was just a mask. Catching didn’t make her who she is. It gave her a means to express who she always was.

“Aubree is one of the greatest people I’ve ever met and had the privilege of being around,” Carda said. “Not only with softball but just in life. She is the most selfless person. Whether it’s helping you figure out something with softball or it’s off the field and you are struggling and need help with something in life, she is someone you need in your corner.”

Even more than you need her behind the plate. Which is saying something.