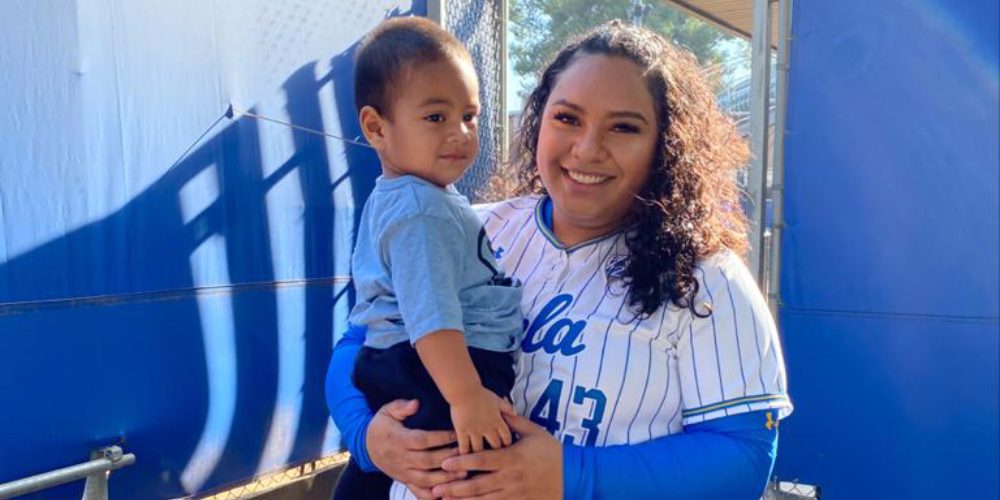 Jenavee Peres rounded third base and headed into the celebratory arms of her teammates waiting at home plate.

The UCLA graduate student had just launched a home run over the leftfield fence at the St. Pete Clearwater Elite Invitational, and the ESPN cameras zoomed in to capture the moment.

Nearly 2,500 miles away in Southern California, 19-month-old Levi Peres-Faatoalia was stationed in front of the television watching the game with his grandparents.

He screamed “Mom! Mom! Mom!” once he saw Peres crush the ball.

Levi was the reason Peres left softball in the winter of 2017 once she found out she was pregnant, and is one of the biggest reasons she has returned this season.

“If you had asked me at this time last year if I would have even thought about playing Division I softball again, I would have said ‘No!’ without hesitation,” Peres said. “This is such a unique opportunity and I am not taking it for granted.”

She was named Mountain West Conference Player of the Year in 2017, and was looking forward to an even better senior season in 2018.

But during a trip home to Garden Grove, California during winter break, Peres began feeling sick. She went to the doctor and was given a blood and urine test.

“Everything came back and they said, ‘Did you know you were pregnant?’ I was like, ‘No. I did not,’” Peres said. “They said, ‘Well, you are three months pregnant.’ I thought, ‘Oh my god, are you serious?'”

In an instant, her world changed. Peres thought about how she would tell her parents, her coaches and her teammates. She wondered how this would impact her future.

Although she was an adult and just a few credits away from graduating, she worried how it would be perceived as a college athlete.

“I was just honestly extremely scared,” Peres said. “I called my boyfriend and said, ‘I am pregnant, I am scared and I don’t know what to do.’ He reassured me and said, ‘We got it. We can do this.’ But I was freaking out at first.”

Kelly Inouye-Perez needed a player to fill her roster. All-Americans Rachel Garcia and Bubba Nickles were named to the U.S. Olympic team last fall, and the UCLA head coach knew finding quality replacements on such short notice would be tough.

Inouye-Perez began asking around, and someone mentioned the name Jenavee Peres. Inouye-Perez didn’t recruit Peres during high school, and didn’t know much about her. But once she learned more, she was intrigued.

“I didn’t know if she would even be interested in playing or what kind of shape she was in, but I knew she had a year of eligibility remaining,” Inouye-Perez said. “I wanted to find an offensive catcher that could be able to come in and fill that gap, and she seemed like a great option if it could work out.”


Peres had already come to terms with the end of her softball career. She went from being overwhelmed about her pregnancy to feeling a sense of calm about her situation.

“As soon as I heard my son’s heartbeat for the first time, I was done with softball right then,” she said. “It was automatic. I was not even mad. I was going to be a mom.”

Peres graduated from San Diego State while nine months pregnant – “I had to get a really big gap and gown,” she joked – and gave birth to a 9-pound, 11-ounce Levi on June 24, 2018.

Her labor lasted 36 hours and she had complications following a C-section that set her back physically for several months.

Peres began taking classes at Golden West College to become a 911 dispatcher, and was hired for her first “big girl job” with Allied Universal Security Services.

Then, her cell phone rang.

A Compton number flashed on her screen.

“I normally wouldn’t pick it up, but for some reason I knew I needed to answer this phone call,” Peres said. “It turns out it was Coach Lisa saying they needed a catcher and asking if I wanted to come play ball at UCLA next year. I was kind of starstruck at first because it’s Lisa Fernandez.”

Like many SoCal softball players, Peres grew up dreaming about wearing a UCLA uniform. But her life had changed in so many ways, and she was hesitant about joining the program.

Be ready to whip out that blue & gold bc you can catch ya girl back on the field this year in a BRUIN uni as super-duper senior! Thank you @uclasoftball for giving me the opportunity to pursue my masters degree & for giving this mama the chance to comeback & finish out what was started. Big kine moves comin in 2020… GO BRUINS 💙💛

She sat down with her parents to discuss the opportunity. It would mean not only playing, but taking a full class load while pursuing her master’s degree in transformative coaching and leadership.

Peres knew she would need help to balance motherhood, softball and school.

Inouye-Perez became even more confident about Peres joining the program once she met her parents and saw the strong foundation she had in place.

She wasn’t deterred by Peres being a mother. Rather, she embraced having a player with so much life experience in the dugout.

Inouye-Perez and Fernandez are both mothers, and their children have always been around UCLA practices and games.

“It’s a big part of who we are and it’s a big part of our philosophy as a program,” Inouye-Perez said. “It’s family, school and softball in that order. Our girls are used to seeing us with our kids and being moms.”

Inouye-Perez may not even be coaching if she wasn’t granted a similar chance by former UCLA head coach Sue Enquist.

“When I first found out I was about to have my first child, I seriously considered leaving the game because I didn’t think I could do both. But Sue allowed me to be a mother and an assistant coach,” Inouye-Perez said. “I am a strong advocate that women should not have to make decisions on one or the other. They have the ability to do it all. They can be a mother and pursue their dreams.”

Peres needed a waiver from the NCAA to be eligible to play, and her former coaches helped in the process.

“I have so much respect for Kathy and Stacey. Both of them wished her well and communicated with us throughout,” Inouye-Perez said. “The whole thing turned into a positive experience when it could have been an unfortunate ending. It’s great to see people that took care of her and provided her an opportunity at San Diego State still supporting her. They put what was best for the athlete ahead of everything else.”

Although she’s only been with the team for a little more than a month, Peres has already made a big impact on her teammates. Her fun-loving personality and knowledge of the game have become valued assets in the dugout and behind the plate.

“She has really brought a good spirit to our team. She is always laughing and cracking jokes,” said UCLA sophomore pitcher Megan Faraimo. “It’s been really inspiring to see how she handles all the responsibilities she has and how gracious she is about it. I just really appreciate her and I am really grateful she is my teammate.”

One of her uncles is NFL Hall of Famer Troy Polamalu. The former Pittsburgh Steeler and USC star has followed his niece’s return to softball and offers advice whenever he can.

So proud of my niece https://t.co/4w2YauPotr to overcome adversity step back onto the ball field and recreate the some #43 magic. pic.twitter.com/dMFobWXxyt

“He’s been very supportive,” said Lupe Aumua, Peres’ mother and Polamalu’s older sister. “Once Jenavee began talking with UCLA about this, he said this is a once-in-a-lifetime kind of opportunity that doesn’t come around very often. There are a lot of women out there that are in the same position and would die for this. He wanted her to go for it.”

Peres needed the encouragement from her family to get over some of  her initial apprehension. As excited as she was about potentially returning to the field, she felt a bit of guilt and selfishness.

“I actually had lost myself a little because I was so into being a mom and all I was thinking about was caring for my son and whatever he needed,” Peres said. “But I had an epiphany once I got this opportunity that I need to take better care of myself. I still need time for myself. I needed something to call my own. I am more than just a mom. I am Levi’s mom, but I am still myself too.”

Although Peres is immersed in school and softball, she hasn’t completely abandoned her “big girl job.” She still tries to work a few hours as a dispatcher when she can.

Saying goodbye to Levi each day for classes, practices and road trips has been the biggest challenge for Peres.

“It is really hard because he is my best friend,” she said. “But it’s only temporary, and I will spend these next five months living my best life and going out with a bang and trying to make him proud of his mom.”

Having gained the perspective of being a mother and the gratitude for receiving a second chance at softball, Peres is playing more loose and free. She knows there are bigger things in life than a strikeout or a passed ball.

Peres made her playing debut for UCLA last weekend in Clearwater and had two home runs, two doubles and five RBIs in 15 at-bats. (Her home runs have already become known as ‘Mom bombs’ on social media.)

She conducted a postgame interview with ESPN’s Holly Rowe to discuss her return to the game as a mother, a platform nobody could have imagined only two months ago.

“Things will happen in life and it is what you do next that is your defining moment,” Inouye-Perez said. “I told her it may be karma and that things happen for a reason.”

Back home in Southern California, Levi was waiting to FaceTime his mom after every game. His grandparents have promised to videotape important moments so Peres won’t miss them.

During one of his mom’s at-bats last weekend, Levi said his first two-syllable word.

“He said the word ‘happy’ when he saw her on the TV,” Aumua said. “We were surprised, but he summed up how she is feeling right now. Her son confirmed it. She is happy.”