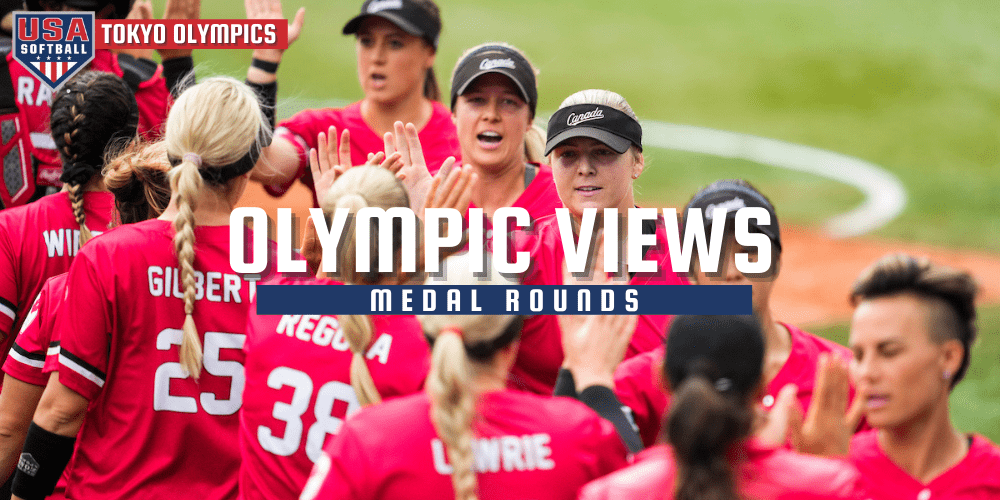 Having just made history by capturing the first softball medal in the country’s history, Canada was more concerned about ensuring future generations could get the same chance.

Once they celebrated on the field, Canada began making pleas for the sport to remain in the Games. Softball returned to the Olympics this year in Tokyo after a 13-year absence. But the earliest it can return again is in Los Angeles in 2028.

“I think a terrible injustice was done to women’s softball when it was taken out in 2008,” Canada coach Mark Smith said. “When you look at the parity that was displayed here this week, how close the games were across the board, including Italy, who didn’t win a game, you didn’t know who was going to win until you really got to the last (outs).”

San Jose State graduate Emma Entzminger gave Canada the early lead with a two-run single in the second off Mexico starter and former Arizona ace Danielle O’Toole. But Mexico tied the score on RBI singles by former Kentucky standout Brittany Cervantes in the third and Suzy Brookshire, who played for San Jose State and Long Beach State, in the fifth.

Wisconsin graduate Kelsey Harshman drove in the game-winning run for Canada in the fifth inning on a sacrifice fly off O’Toole.

Lawrie (1-1), who came out of retirement to pursue an Olympic medal and inspire her two daughters, came on in relief with runners at the corners in the fifth and retired former Texas A&M star Tori Vidales on a groundout. Lawrie struck out four, fanning Cervantes to end the game and secure Canada’s historic bronze.

“There’s so many amazing women that were here this week, and so many other amazing women who weren’t here this week and play this sport,” said Canada’s Jenna Caira, a former Syracuse ace. “I hope that we were able to show a little glimpse of that to the world and especially to the IOC, and I hope that they can take that into account of how many eyes are watching and how many female athletes love this sport.”

Although Mexico was denied the bronze, just making it to the medal round was a great accomplishment in the country’s Olympic debut. Everyone in the sport just hopes more chances come in the future.

“That was the best game I’ve been a part of,” Cervantes said. “People now know who we are.”

Medal History Will Be Made

Either Canada or Mexico will be leaving Tokyo with the first softball medal in each country’s history.

The teams will meet in the bronze medal game (Tuesday at 12:05 a.m. ET, CNBC) after Mexico secured its spot with a 4-1 win over Australia to close out group play.

Making its Olympic debut with a team filled with American-born college players, Mexico won its final two games to secure a spot in the medal round.

Utah graduate Anissa Urtez continued to swing a hot bat for Mexico, going 2 for 4. Former Kentucky standout Brittany Cervantes was 2 for 2 with a run scored.

Australia’s medal streak ended, with the Aussies having won silver or bronze in every past appearance.

Canada has competed in every Olympic softball appearance, but has never placed higher than fourth.

The Canadians had a spot in the bronze medal game already secured before ending group play with an 8-1 victory over Italy in six innings.

Former Western Kentucky standout Larissa Franklin drove in three runs for Canada. Former Ball State All-American Jen Gilbert, 29, who had been hitless in seven at-bats, had a go-ahead home run over the centerfield wall in the second inning.

McNeese State graduate Erika Piancastelli drove in Italy’s first Olympic run with an RBI single in the third, setting off a celebration by the Italian squad.

The Canadians finished 3-2 in group play, with both losses coming by 1-0 scores against gold medal opponents, Team USA and Japan.

The emotions were still raw for Canada in the immediate aftermath.

“Sorry, I’m crying,” the former Minnesota star said. “This is a phenomenal group of women.”

Canada still has a chance to win the first softball medal in the country’s history. The Canadians (2-2) have already clinched a spot in the bronze medal game ahead of their final round-robin game against Italy on Monday. Canada will face either Australia or Mexico for bronze.

Groenewegen started for the fourth straight game and tossed three scoreless innings. She allowed three hits and a walk while striking out two. Former Syracuse ace Jenna Caira come on in the fourth inning and retired four of five batters she faced.

Canada turned to former Washington ace Danielle Lawrie, a mother of two who came out of retirement to pursue an Olympic medal, for the final few innings.

With a runner on second base to start the bottom of the eighth via the international tiebreak rule, Japan sacrificed the runner to third. Lawrie issued a pair of intentional walks to set up a force play at the plate. But Eri Yamada lined a single to center to end the game.

But Canada know it still has a chance to make history by winning a bronze, something that could inspire future generations of young girls in the country. The players just need time to process the sudden ending that eliminated any visions of gold.

“I’m still trying to navigate through that,” said Canadian infielder and former Washington All-American Jenn Salling. “It’s important that we allow each other the opportunity to just sit in this a little bit. It’s tough.

Romero was 2 for 3 with a home run and a double. The former Oklahoma star homered to deep left field in the bottom of the third to give Mexico a 2-0 lead.

Urtez, a Utah graduate, put the game of out of reach with a shot to deep left field in the bottom of the fifth to plate former Oklahoma standout and Big 12 Conference Freshman of the Year Nicole Rangel (nee Mendes).

Escobedo, the former Arizona State ace, struck out four with no walks to earn her first Olympic victory.

Jenna Caira is well known for her wicked change-up, and the pitch helped the former Syracuse star lead Canada to another Olympic win.

The former Syracuse star came on in relief and stymied Australia’s run-scoring chances in a 7-1 victory over the Aussies.

Caira, 32, entered the game with one out in the second inning. Canada led 3-1, but Australia had the bases loaded and one out. Caira eliminated the threat with a strikeout and a line out. She pitched the next four innings, allowing only two hits and striking out three to earn the win.

Canada improved to 2-1 in Olympic play, with the lone loss a 1-0 setback to Team USA. The Canadians have an opportunity to clinch a spot in one of the medal games on Sunday when they face host Japan. Canada has never won a medal in the Olympics.

Danielle O’Toole had a solid Olympic debut in the circle for Mexico in a 3-2 loss to Japan in eight innings that saw former Pac-12 players shine.

O’Toole threw a complete game, allowing only five hits. The former Arizona ace had two strikeouts with no walks or hit batters in 91 pitches.

Japan’s runs off O’Toole came on a solo home run in the second inning, an RBI double in the fifth and a walk-off bunt single in the eighth.

Former Utah shortstop Anissa Urtez drove in both of Mexico’s runs, hitting a solo home run in the fifth and a game-tying RBI single in the seventh. (Urtez’s fiancée, Amanda Chidester, came through in the clutch earlier in the day for Team USA by driving in the lone run in a 1-0 win over Canada).

Mexico had a chance to spring the upset over host Japan, but left the bases loaded in the eighth inning. Japan capitalized in the bottom half of the inning, scoring the runner from second via the international tiebreaker rule on the well-placed bunt.

Ellen Roberts provided some clutch relief for Australia in a 1-0 victory over Italy. The former Memphis ace replaced Kaia Parnaby in the seventh inning, needing just one out to secure Australia’s first win of the Games after losing to host Japan in the opener.

Italy had two runners on base and two outs after a Giulia Longhi singled and Laura Vigna walked. Roberts was called to make her Olympic debut, and got out of the jam by striking out Marta Gasparotto looking.

Australia scored the lone run in the second inning, with catcher Jade Wall driving in Taylah Tsitsikronis on an infield single with two outs. Tsitsikronis led off the inning with a double.

Every game played on opening day in Tokyo had a special meaning because of softball’s long absence from the Olympics. But Canada’s Sara Groenewegen had reason to be even more grateful.

Almost three years ago to the day, Groenewegen nearly died after contracting Legionnaires disease. The former University of Minnesota ace spent 10 days in a medically-induced coma in the summer of of 2018.

Yet, there she was, starting in the circle for Canada as it began its quest for a medal at Azuma Baseball Stadium. Groenewegen gave up no hits in four innings, striking out three and walking one as Canada beat Mexico 4-0.

“You can’t make this up. It’s incredible and pretty breathtaking for me,” Groenewegen said.

Team Italy held the No. 1 team in the world to just five hits and two runs in the opening round matchup. Alexia Lacatena entered the game in relief of starter Greta Cecchetti in the fifth against Team USA with runners on first and second. She held USA to just one hit in two innings of work.

Lorenz Takes Prides in Her Parents Overcoming Their Addictions