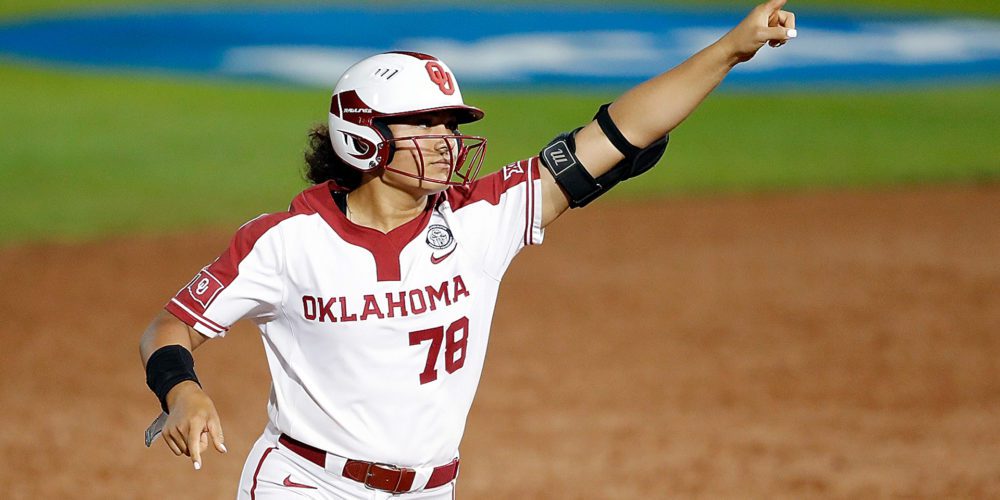 It’s no surprise that our staff voted unanimously to name the defending national champions No. 1 in our D1Softball Top 25 Preseason Rankings.

Oklahoma set an NCAA record with 161 home runs a season ago and held the top position in our rankings for the majority – since Week 3 – of the 2021 season.

Checking in at the No. 2 spot is WCWS semifinalist Alabama. The Tide return 12 players from a 52-9 squad, including All-Americans Montana Fouts and Kaylee Tow. Oklahoma State is No. 3 as the Cowgirls picked up a handful of transfers in the offseason, including Miranda Elish (Texas) and Julia Cottrill (Florida).

UCLA begins the season at No. 4 with a healthy Megan Faraimo and a veteran squad behind her.

Florida didn’t make a WCWS appearance last season, but we have them sitting in the No. 5 spot ahead of runner-up No. 6 Florida State. No. 7 Washington benefits from another year with Gabbie Plain and added some youth with international experience. Arkansas rounds out the Top 8 just ahead of No. 9 Texas and No. 10 Missouri.

The biggest jump in the rankings? No. 12 Michigan. The Wolverines return pitching duo Alex Storako and Meghan Beaubien, and will be tested early on the road the first three weekends of the season.

Unranked at the close of last season, No. 22 Louisiana and No. 23 Northwestern enter the preseason rankings just ahead of No. 24 Liberty and No. 25 James Madison. The Dukes graduated seven senior starters from last year’s team.

The SEC leads the rankings with eight teams, followed by the Pac-12 with five and the ACC with four. The Big 12 has three, the Big Ten has two and the CAA and ASUN each have one.