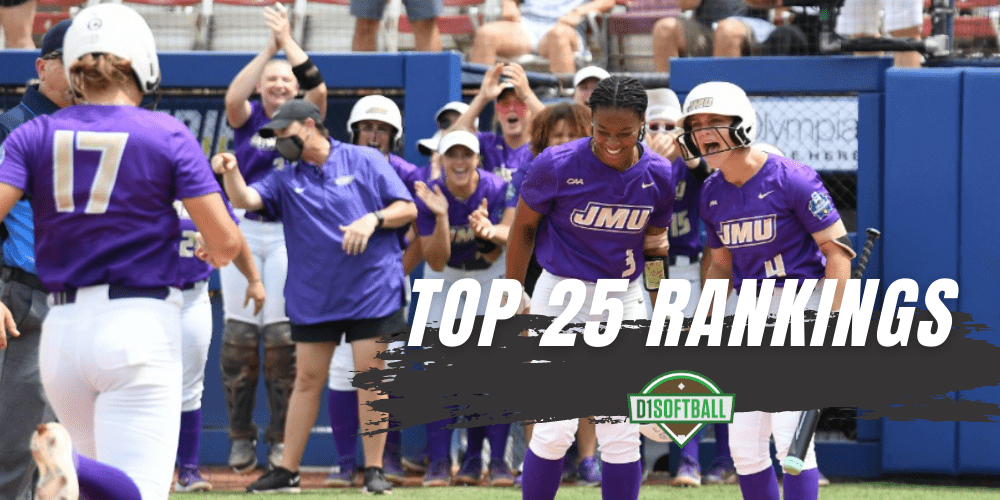 Get 20% Off An Annual Subscription. Use Coupon Code: postseason21

No. 1 Oklahoma took a longer road than expected to remain in the top spot in our D1Softball Top 25 Rankings, as it captured yet another national title

The Sooners held the top position since Week 3 of the season and never looked back. OU avenged all four of its losses in the 2021 season, never falling twice to another opponent.

Checking in at the No. 2 spot is WCWS finalist Florida State. A team entering the WCWS with a team batting average below .300, FSU broke out during the tournament due in part to Kaley Mudge, who led the tournament with 14 hits, and tied for batting average (.500). Alabama finishes the season at No. 3 after dropping the “if necessary” game of the semifinals to FSU to miss out on the championship series.

The biggest jump in the rankings? No. 4 JMU. Odicci Alexander’s WCWS performance will be talked about for decades. No. 5 Oklahoma State remains at the same spot, while UCLA drops to No. 6 in the poll after falling to the eventual national champion. No. 7 Arizona, No. 8 Georgia, No. 9 Washington and No. 10 Florida round out the top 10.

No. 12 Virginia Tech made another big jump after upsetting Arizona State at the Tempe Regional and taking a game from UCLA at the Los Angeles Super Regional. No. 23 Notre Dame and No. 25 Liberty made our final Top 25.

The SEC leads the poll with eight teams, followed by the Pac-12 and ACC with five. The Big 12 has three and the AAC, CAA, ASUN and Big Ten all have one.